A drone captured the spectacular palette of fall colors in the landscape around the Snowbasin Resort in Huntsville, Utah on Oct. 2. (Credit: Scott T. Taylor via Storyful)

Visitors of Angels Landing, one of the country’s most popular national park destinations, will soon be required to obtain a permit to hike.

Zion National Park officials announced that as of April 1, 2022, hikers who want to take on the infamous trail in order to see stunning views of Zion Canyon's 270-million-year-old rock layers in Utah will have to enter an online lottery to try and obtain a permit.

"Angels Landing is one of the most iconic destinations in Zion National Park and issuing permits will make going there fair for everyone," Zion National Park Superintendent Jeff Bradybaugh said in a statement. "The system we’ve put in place will reduce crowding on the trail, address safety concerns and make it easy for visitors to plan ahead."

Interested visitors can pay $6 to enter seasonal lotteries or a day-before lottery, which opens every day at 12:01 a.m. and closes at 3 p.m. Mountain Time. The first lottery opens on Jan. 3 for permits beginning on April 1.

Successful permit holders will also have to pay a $3 fee per person, which covers the costs to manage the lotteries and for additional National Park Service (NPS) rangers who will assist visitors and check permits, officials said.

NPS said it will "monitor and adjust" the pilot program as needed. It was created after receiving comments from nearly 1,000 members of the public, park neighbors and other stakeholders, as well as metering the number of hikers on the trail over the past few years.

"As the number of people who visit Zion continues to rise, NPS is preparing a plan designed to provide high-quality visitor experiences and sustainably manage park resources. The Angels Landing Pilot Permit Program will inform that planning process," the park said in the statement.

The Angels Landing day hike climbs roughly 1,500 vertical feet along the narrow fin of stone that reaches a top elevation of 5,790 feet, according to Utah’s tourism office. It’s roughly 5.4 miles roundtrip — and not for the faint of heart. About the last third of the trail has steep drops on the sides. 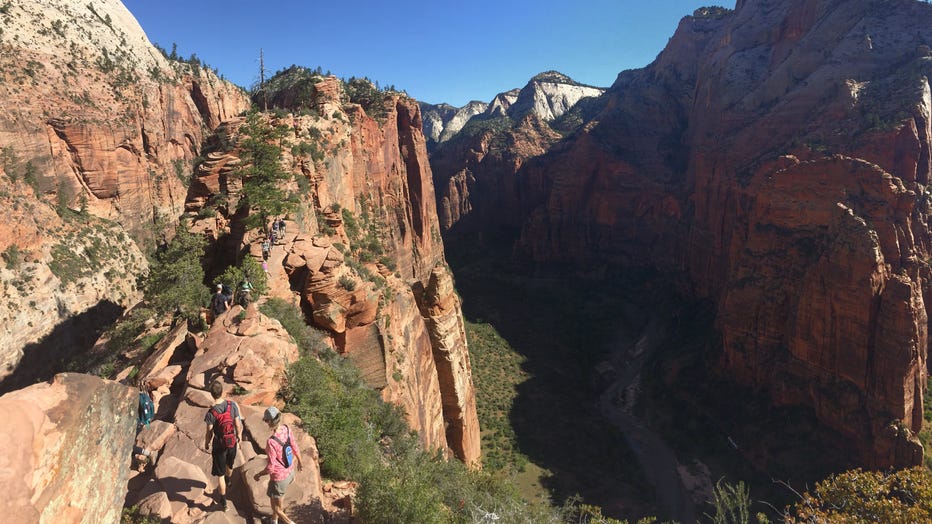 The trail to Angels Landing in Zion National Park is pictured in a file image. (Photo credit: Megan Ziegler)

"As you approach the summit, the trail follows carved-out steps along the spine of a knife-edge ridge. Heavy chains attached to the rock serve as handrails along most (but not all) of the drop-offs. Hikers must make a steep scramble to surmount the first knob, followed by an unprotected walk across a narrow saddle that is flanked by sheer drop-offs. On the Angels Landing hike, you truly get a feeling of walking on the razor’s edge," the tourism office writes of the final approach to the summit.

Once reaching Angels Landing's highest point, brave hikers are treated to an unforgettable 360-degree panorama of the park.

"If it’s not the most dangerous trail in America, it’s one of the top five," Travis Heggie, an associate professor at Bowling Green State University who studies deaths in the national park system, told the news outlet.

Interestingly, the narrow section where the park service installed the chain handrail isn’t where hikers have typically fallen. Instead, Jeff Rose, a professor of outdoor recreation studies at the University of Utah, noted how most fell either before the chained section or after it. Some hikers fell from Angels Landing itself.

Rose told FOX 13 that the data indicated hikers have been getting too close to the edges. Of the thirteen people who have fallen to their deaths from Angels Landing since 2000, most were men, and most were visiting from outside Utah, including one man from Germany.

Visitors are advised to hike in groups of three or more, stay together and away from the edge.

"Don’t get within 6 feet of the edge where you can fall and potentially lose life and limb," Rose told the outlet.