DALLAS - A professional basketball organization honored Andre Emmett, who was killed in September 2019 near his Dallas home.

BIG3, a professional 3-on-3 basketball league made up of former NBA and international players, retired the jersey of one of its key players, Emmett, this weekend.

Emmett’s mother, Regina Oliver, accepted the jersey as a celebration of her son's life. 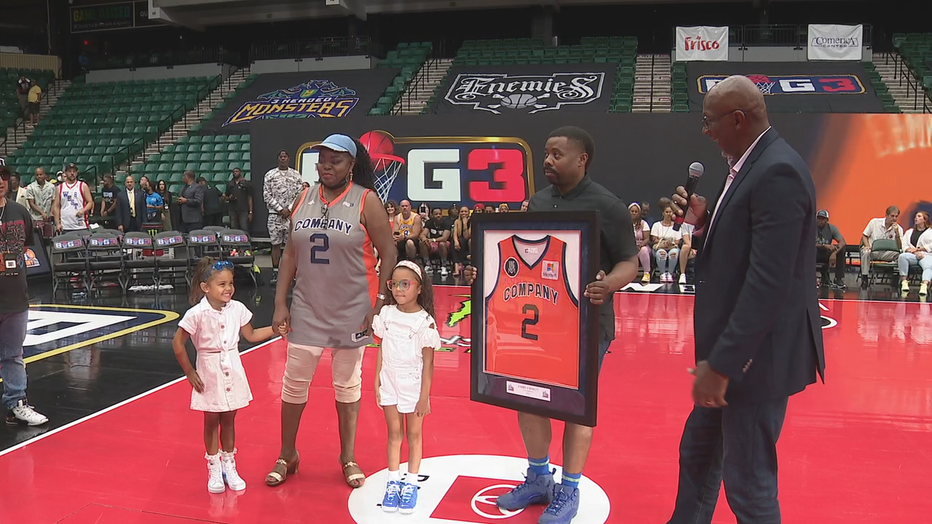 Emmett was shot and killed when he was robbed outside his home in Old East Dallas in 2019.

Keith Johnson and Michael Lucky have been charged with capital murder. The case has yet to go to trial.

The Dallas Carter High School standout also starred at Texas Tech. He was drafted into the NBA in 2004.

He spent a couple years in the NBA before spending more than a decade playing overseas.

The BIG3 drafted him in 2018, allowing him to be closer to home.

"He did not want to go back overseas because he had children," Emmett’s mother said.

Kennedy Grace and Zara Sloan Emmett no longer have their father, but the jersey retirement gives them a sense of how big his career was.

He was a leading MVP candidate for the BIG3 in 2018 and had one of the most impressive playoff runs in BIG3’s short history.

But as Emmett was recognized for his production on the court, his family knows know it’s what he produced off the court that he was most proud of.

"He is watching this from the heavens and he’s so excited to see me with his girls," Oliver added.

A trial date for Emmett’s murder is set for September 12.