The city of Dallas unanimously approved the crosswalk project last month and the installations are in three primary colors -- red symbolizes the blood, yellow symbolizes optimism and growth and black signifies progressiveness and strength.

DALLAS - New crosswalks in South Dallas were officially unveiled with the words All Black Lives Matter as part of Martin Luther King, Jr. Day celebrations in the area.

While some events in North Texas went virtual, others went on to honor the legacy of the civil rights leader.

Leaders in southern Dallas celebrated the visual impact of the new crosswalks.

"That we do this and we do this specifically in South Dallas... an area for so long that so many have wanted to ignore," said State Rep. Jasmine Crockett.

The city of Dallas unanimously approved the crosswalk project last month and the installations are in three primary colors -- red symbolizes the blood, yellow symbolizes optimism and growth and black signifies progressiveness and strength.

RELATED: "All Black Lives Matter" to be added to six Dallas streets

No taxpayer dollars were used to fund the crosswalk project. Abounding Prosperity, Inc., has agreed to pay for the crosswalks and will maintain them for the next ten years with private funds received for the project. 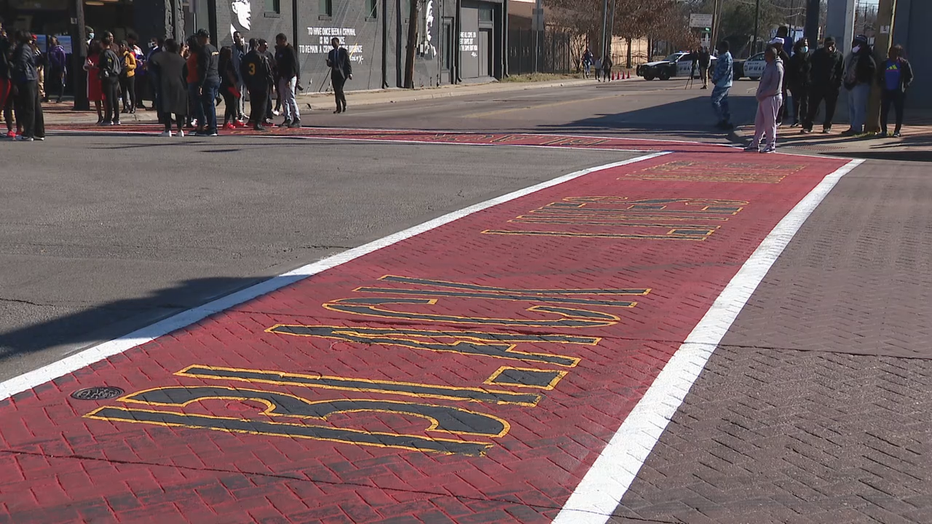 Due to a rise in COVID-19 cases, the city of Dallas hosted a virtual event. The theme of the 40th annual MLK celebration was "a look towards the future." It featured photographs from previous parades.

"As we celebrate Dr. King in the City of Dallas together, let’s understand the importance of character, commitment and courage," said Eddie Glaude Jr., commentator.

Folks lined the streets to take part in a parade in Grand Prairie.

"My girls are in the pep squad from Garcia Elementary School so we came out to support them," said Erikka Campbell.

The parade route traveled down the recently renamed Dr. Martin Luther King Street. This year's theme was "Community, Youth, Law Enforcement Walking Hand in Hand Together: A day on...not a day off."

"Everybody comes together for a special holiday and we come together to unite as one city," said Macie McCorkle.

Some North Texans felt compelled to participate in acts of service to honor the legacy of King.

In Lewisville, strangers came together to help clean up one of two African American cemeteries in the city. At Champion-Macedonia Cemetery, the earliest tombstone dates back to the 1880's.

"My kids are at that age when they should understand the importance of giving back to the community," said Kyla Rankin. "They don't have a lot of finances to give back but they can give their time."