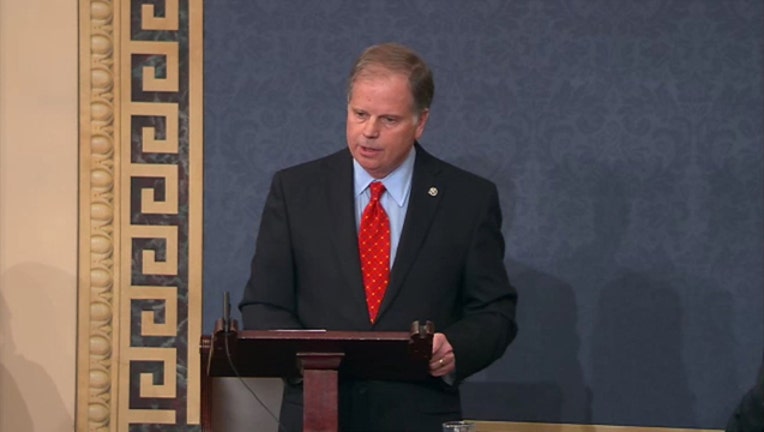 WASHINGTON (AP) - Congress must act to address gun violence, even as lawmakers protect the Second Amendment rights of gun owners, Alabama Sen. Doug Jones said Wednesday in his maiden speech to the Senate.

Jones, a Democrat who won a special election in December, said the nation has reached a tipping point on gun violence following the mass shooting at a Florida high school and the activism it spurred, led by surviving students.

Jones compared students at Marjory Stoneman Douglas High School in Parkland, Florida to young people who demonstrated after four girls were killed in a Birmingham church bombing in 1963. Jones later prosecuted the bombers.

The problem of gun violence hits close to home, Jones said, noting that Alabama had the second-highest rate of gun deaths in the nation in 2016, with a total of 1,046 Alabamians killed by guns that year.

A longtime gun owner and hunter, Jones said the gun debate has become polarized on both sides. Rather than "demonize" the National Rifle Association, gun control supporters should focus on efforts to keep guns out of the hands of criminals and those who would do harm to themselves or others, Jones said.

Similarly, he urged the NRA and other gun-rights groups to "stop using scare tactics to convince law-abiding gun owners that the federal government is hell-bent on taking their guns away. That is simply not going to happen and everyone knows it."

Jones spoke as gun control proposals failed in the Alabama Legislature. Most Republican committee members skipped a debate Wednesday on the bills, including one to raise the minimum age to buy an AR-15 or similar rifle. The lack of action likely killed the bill and came a day after the Alabama House failed to bring up a vote on a Republican bill to arm teachers, signaling that bill's likely demise.

Associated Press writer Kim Chandler in Montgomery, Ala., contributed to this story.