PLANO, Texas - There are new details about the actions of the man Plano police are investigating for a woman's murder.

Police call 29-year old Bakari Moncrief, who is a suspect in a burglary Saturday morning, a person of interest in the murder of 43-year-old Sarmistha Sen.

But for the burglary, Moncrief's bond was set at an unusually high $1 million.

A police document and the man whose home was broken into are shedding new light on Moncrief. 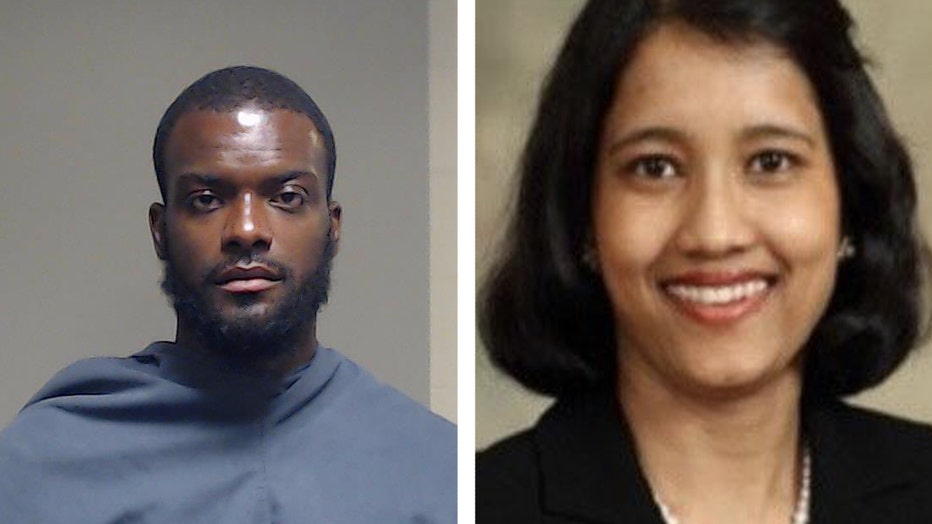 RELATED: Person of interest in custody after Plano jogger's murder

An affidavit obtained by FOX4 on Wednesday states, “upstairs in the residence, a television had been moved from a desk and placed on the floor.”

Detectives took “DNA swabs of the television and took a large piece of stone used to smash the glass for possible DNA evidence.”

Officials also noted in the affidavit that the burglary happened not far from the scene where police found the body of 43-year-old Sarmistha Sen.

The married mother of two and cancer researcher was out for a morning jog Saturday, when passerby’s reported seeing her body near a creek along a trail by the corner of Legacy and Marchman.

While police were on scene investigating the homicide, the affidavit states an officer located Moncrief, who matched the burglary suspect description, at a gas station located about a 30-minute walk from the burglarized home.

According to the affidavit, he was “using the outside electrical outlet to charge his cellular telephone,” and when detained he reportedly told police, “I ain’t a coward,” similar to what was recorded on the Ring video.

FOX4 did reach out to numbers listed as Moncrief’s family. One woman declined to comment, saying they aren’t talking with reporters.

There were no records of Moncrief having a criminal history.

Meanwhile, the victim’s friends and neighbors honored her with a vigil Wednesday night.

Organizers say it was a mix of friends, family, neighbors and even people who just stopped by who gathered to pay homage.

Those who gathered sang prayer songs that they say were some of Sens favorites. Her friends say she loved to sing and they adored her for that.

While it was a bit windy for candles, they had 43 candles together for her 43 years of life. Close friends were touched by the turnout.

Friends encouraged people to donate to organizations supporting cancer research in her honor. Sen was a cancer researcher and devoted a lot of time to it.