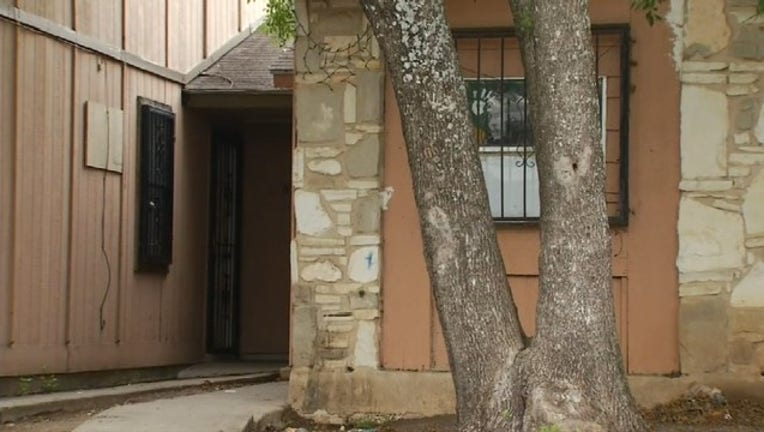 SAN ANTONIO (AP) - Authorities have rescued eight unsupervised children from a San Antonio home where a 2-year-old boy was chained to the ground in the backyard and a 3-year-old girl was tied to a door with a dog leash, sheriff's officials said Friday.

Deputies arrived at the home after receiving a call just before midnight about a child crying for a long time, Bexar County Sheriff's Office spokesman James Keith said. The deputies didn't get a response when they knocked on the front door, and when they looked in the backyard they discovered the two restrained children.

"It's sickening. To call this horrific would be an understatement," he said.

The boy had a metal chain strapped around his ankle, with the other end of the chain fixed to the ground, Keith said, adding: "It was the same kind of setup you would use for a dog." Both children were taken to the hospital, and the girl was being treated for a broken arm, he said.

Deputies later found six unsupervised children inside the house on San Antonio's northeast side. Two people identified as parents of those six children arrived later and were taken into custody for questioning, Keith said. The children, between the ages of 10 months and 13 years, were placed in the care of child welfare authorities.

The mother of those six children, 34-year-old Porucha Phillips, was later arrested, Keith said. He said Phillips was being held at a county magistrate's office facing two charges of injury to a child by omission. One of the charges alleges serious bodily injury.

Keith said authorities believe that Phillips was also responsible for the two children found outside. It was unclear if Phillips had an attorney, and The Associated Press couldn't immediately find a working phone number for her or the home.

The local district attorney's office didn't immediately return a message seeking comment, and the name of the father hasn't been released.

The two children found confined in the backyard also are in the temporary custody of child welfare workers. Keith said the boy and girl are believed to be siblings, and that authorities were "actively trying to find their parents."