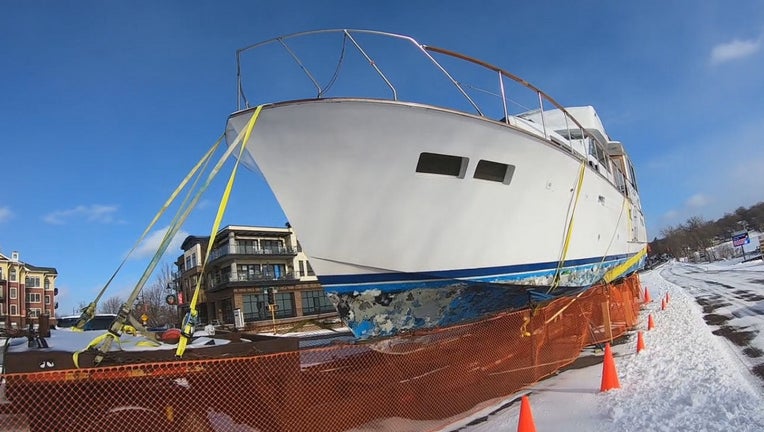 The Seanote is back on shore after breaking through the icy Lake Minnetonka over the past couple of weeks.

MINNETONKA, Minn. (FOX 9) - After days of work and battles with the freezing lake, a 58-foot yacht stuck on Lake Minnetonka is now on land.

The "Seanote" had been a charter on Minnetonka since 1995. But a year ago, the owners sold it to a man from Texas. The new owner planned to transport it to the Mississippi and then sail it south.

After days of work and battles with the freezing lake, a yacht stuck on icy Lake Minnesota is now on land.

"It was going to cost him $50,000 to move it from here just to the river," explained Jay Nygard who followed the boat removal effort. "And he was fine with all of that, but then the transport company fell apart on him."

This summer, the Seanote was sold again to a local owner, but the marina where it used to winter didn’t have room anymore. As the current owner waited for parts for a proper trailer, winter set in which led to a scramble.

Nygard tracked the progress of the boat on YouTube as it cut through icy waters to figure out a way to get it back to shore.

"I got a phone call from a friend who said there’s going to be this big boat going through the ice and then he called me one morning and said it’s going," recalled Nygard.

As he started documenting the monumental effort to get the boat out, Nygard says his YouTube views have shot up.

Now as the boat sits in a makeshift trailer at the Hennepin County Water Patrol parking lot waiting to be moved by road, it’s become a minor tourist attraction.

The saga of an orphaned yacht that became a must-see stream.

"The fascination was, this is a slow train wreck," said Nygard. "And we want to see it happen. The train hasn’t wrecked so people want to keep watching."