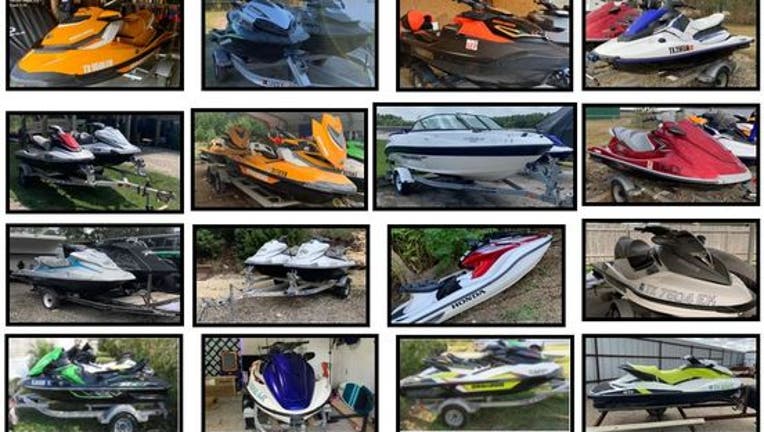 GALVESTON, Texas - More than $275,000 worth of stolen watercraft and other vehicles have been recovered after a Texas Game Warden's investigation. Officials say 27 stolen vessels and trailers were recovered and now three suspects have been arrested for theft. The suspects face multiple felony charges and are suspected of running an interstate theft ring.

The Texas Parks and Wildlife Department says in a news release that Texas Game Warden Jonathan Griffin of the Marine Theft Investigation Unit began the investigation two years ago when he was looking into a series of boat title discrepancies. Sergeant Griffin says the case began with a tip from the La Marque Texas Parks and Wildlife Department Law Enforcement Office regarding an individual titling numerous jet skis in their name at very low purchase prices. Eventually, a Florida county tax office notified Griffin that the suspect and a second individual were also titling a number of jet skis in Florida in the same manner.

Over the following months, the Marine Theft Investigation Unit worked to trace the jet skis that were bought and sold by the suspects. Investigators uncovered that the jet skis being titled were actually stolen throughout Texas and then sold across multiple gulf states with false titles and identification numbers. Their work then identified a third suspect who had participated in the activity.

"After recovering 27 stolen vessels and trailers, we filed charges and arrested the three suspects for theft and engaging in organized crime," said Griffin. "While the charges are pending, we are working to locate and recover more stolen jet skis and boats that may have been sold using the same scheme.  It has been satisfying to be able to help get this property back to the rightful owners."

The case is currently being handled by the Galveston County District Attorney’s office.

For his work, Sergeant Griffin has now been nominated for Investigator of the Year Award by the International Association of Marine Investigators.