A new controversial election reform bill has been signed into law in Texas.

DALLAS - A new controversial election reform bill has been signed into law in Texas.

Gov. Greg Abbott signed Senate Bill 1 Tuesday morning in Tyler, Texas, where the state senator who wrote the bill is from. The measure passed along party lines last week.

There are also new regulations on early voting hours and the bill increases protections for partisan poll watchers.

Not long after signing the Republican elections bill into law that took two special sessions to pass the legislature, Gov. Abbott called a third special session. He wants to address, among other things, redrawing legislative and congressional districts.

"One thing that all Texans can agree, and that is that we must have trust and confidence in our elections. The bill that I am about to sign helps to achieve that goal," Abbott said. "The bottom line of what the law does is what the members around me have said all along. The Texas law, it does make it easier make it easier than ever before for anybody to go cast a ballot. It does also however make sure that it is harder for people to cheat at."

They fought to block SB1 for months, even fleeing the state to deny a quorum.

It took the regular session and two special sessions to get the bill passed once enough Democrats returned to the state.

Democrats call it voter suppression and say there is no evidence of widespread fraud in Texas.

The bill expands hours around 12 days of early voting but also bans 24-hour and drive-thru voting. Both were introduced in Democrat-heavy Harris County during the 2020 general election. 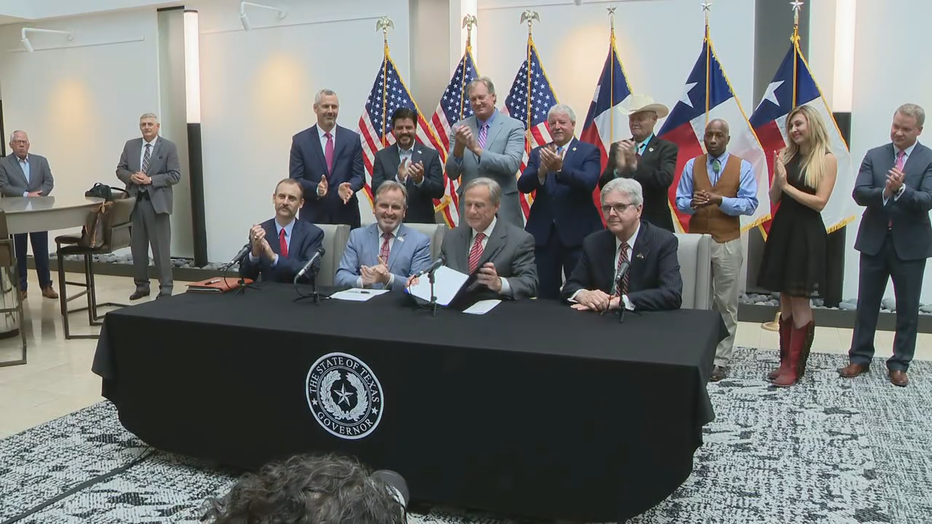 Republicans say voter turnout has increased over the last decade.

"I don’t want to hear this nonsense and the lies that it’s tough to vote in Texas," said Lt. Gov. Dan Patrick. "Texas turns out voters because they have confidence in our elections that our elections are always gonna be fair."

But before it was even officially a law, several federal lawsuits were filed including one by Harris County and others by community and advocacy organizations.

"LULAC strongly opposes this attack on our voting rights and freedoms because they have one and only one purpose; to dilute our voice at the ballot box and continue to stop electoral change in Texas," said Domingo Garcia, the national president for the League of United Latin American Citizens. "Texas voters deserve fair, open, and transparent elections, not a process rigged to deny our communities whose numbers are growing, the right to vote."

Opponents call the new law unconstitutional and argue it violates several federal laws including the Voting Rights Act and the Civil Rights Act.

They say the law puts hurdles in place for minorities, seniors and voters with disabilities.

The new law goes into effect 90 days before the pivotal March primaries highlighted by the governor's race and congressional midterms.

"Then that injunction really will be appealed to the Fifth Circuit in New Orleans where they will likely issue an opinion before the date when the decision must be reached to have the primary in a timely way," explained David Coale, a constitutional attorney.

SMU Political Science Professor Matthew Wilson says what’s being taken away is what was added to assist voting during the pandemic last year.

"It’s gonna be hard to make the case that essentially creating a somewhat expanded voting opportunity relative to what existed two years ago is going to be an unconstitutional infringement on basic voting rights," he said.

Not long after signing the Republican elections bill into law that took two special sessions to pass the legislature, Gov. Abbott called a third special session. He wants to address, among other things, redrawing legislative and congressional districts.

Local elections officials say the anticipated legal challenges to the voting law and its changes mean some uncertainties for the next significant election.

County election officials are already dealing with uncertainty for the 2022 midterm election.

Gov. Abbott called lawmakers back to Austin to redraw the district maps later this month.

If a new map is approved before Nov. 15, the primary will be in March 1. But if it's drawn after, it delays the time when officials can print ballots.

Mail-in ballots have to be sent no later than 45 days before the election date.

Another delay could happen with a possible decision by a judge on the law itself.

"In 2020, there were all kind of lawsuits being brought on very fast tracks because there are certain mandatory dates that cannot be moved," Coale said.

The Texas Attorney General’s Office has not yet commented on the lawsuits.