Fort Worth ISD confirms a student was killed and another injured during a shooting at a Whataburger right by Paschal High School not long after class let out. Police are now trying to find the shooter.

FORT WORTH, Texas - Fort Worth ISD confirms a student was killed and another injured during a shooting at a Whataburger right by Paschal High School not long after class let out. Police are now trying to find the shooter.

A 16-year-old boy is dead, and a 17-year-old girl is in the hospital after Fort Worth police say a fellow high school student shot them outside a Whataburger in Fort Worth around 4 p.m. Friday.

Police say it started as a verbal argument, then a physical fight and then gunfire. The shooting happened just across the street from Paschal High.

Fort Worth ISD confirmed the victims were students in the district and said grief counselors would be at paschal high school next week.

Police know who their suspect is, but right now nobody's under arrest.

Fort Worth Police Chief Neil Noakes says the victims and suspects are all students at a local high school, but neither the police chief nor the district would specifically say they are students at Paschal.

Chief Noakes says the victims and suspects all knew each other.

While no suspect is in custody, investigators do not believe there is any threat to the community. 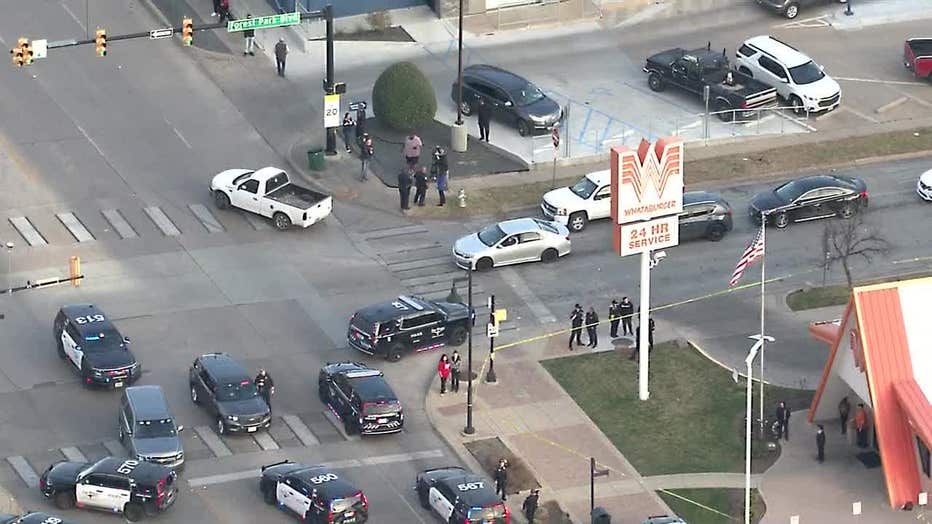 Its uncommon to see the Fort Worth police chief at a shooting scene unless an officer is involved in some way, but he came to this one to show his frustration about gun violence involving young people.

"First, I was mad. I am angry. There is no reason for any young person, a student in high school, to lose their lives at a young age. There is no reason for a student in high school to be carrying a gun and shooting at another student. That anger turned to sadness. We are seeing this across the country with violent crime. Unfortunately, we are seeing this at home in Fort Worth, Texas. I take that personally," Noakes said. "It seems these days with very young people, teenagers, early 20s, conflict resolution always involves a gun. The lack of importance put on human life is staggering to me. What I will say to those young people: you have so much to live for."

Chief Noakes was asked if the Whataburger was a meet up location for the argument. He said that is unknown.

Police are asking witnesses to come forward with any video or information they may have.