With three weeks left to request a mail-in ballot, nearly 1,500 applications have been thrown out in Dallas and Tarrant counties mostly because of the new voter ID law. State and local officials say they are working fast to fix the issue.

DALLAS - Hundreds of Texas vote-by-mail applications are being rejected in Dallas and Tarrant counties.

Now, leaders are trying to create an easy solution to get Texans signed up again.

Just like many other Texas counties, the new voter ID law is creating an issue in Dallas and Tarrant counties. A good number of applications are being rejected.

With three weeks left to request a mail-in ballot, nearly 1,500 applications have been thrown out in Dallas and Tarrant counties mostly because of the new voter ID law.

State and local officials say they are working fast to fix the issue. 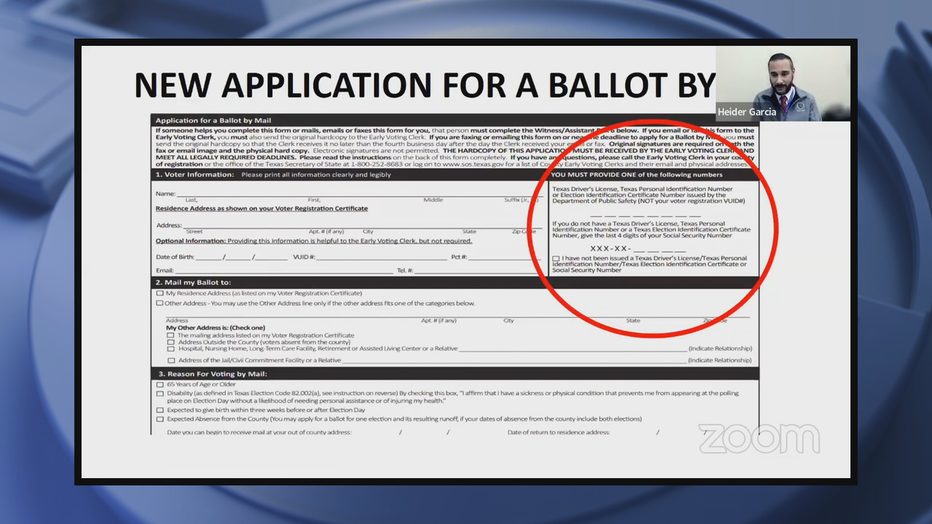 The 2022 primary election is March 1, and early voting will start soon.

With the new voter identification requirement in place for mail-in voting, this month has been busy and confusing for many election officials.

Dallas County Senator Royce West hosted a Wednesday night town hall with Texas Secretary of State John Scott and local election and party officials to sort out what’s being done so that every rejected voter can still cast their ballot.

In Dallas County, more than 6,300 applications have been received.

"No ID counts for 12%, which is about 418 total rejections," explained Nic Solarzano with Dallas County.

In Tarrant County, more than 4,000 people have requested a mail-in ballot.

"Right now, we have rejected 16% of the applications that have come in," explained Heider Garcia with Tarrant County.

So how do you know if your application was rejected?

One option is to track your ballot online.

You can go to votetexas.gov and check to see if your ballot has been rejected.

"It will have an indication under application status that it was rejected," said Christina Adkins with the Secretary of State Office.

If you do not have access to the internet, you should also receive a notification from your local election office.

"We are still getting a rejection letter sent to the voter's home with an accompanying form. We still have processes where we call people to follow up," Garcia said. "I mean, there are still the processes and the tools that we had in place before all this technology was put in place."

If you have not filled out your application yet, you must enter the voter ID you have on file with your election office.

Officials all suggest you put both your driver’s license number and social security number so your ballot has no chance of being rejected.

"So give yourself the advantage of having both numbers on there," Scott said.

Monday is your last day to register to vote.

Feb. 14 is when early voting starts.

The last day to request a ballot is Feb. 18.