The mom of newborn identical quadruplets says she's loving mom life now that all four of her boys are home from the hospital. Good Day talked to Jennifer Marr about what her life is like.

Hardy, Harrison, Hudson and Henry were born at 28 weeks and spent about two months in the NICU. All are doing great.

Parents Jenny and Chris Marr have shared photos and updates with Good Day FOX 4. One photo shows all four brothers with the family’s dog, Zeke.

Jenny joked when they last baby arrived home she promised Zeke that was it – just four babies.

She said she is loving mom life.

Jenny said the nurses in the NICU helped her get the boys on a twin schedule with two feeding at one time and the other two at another time. 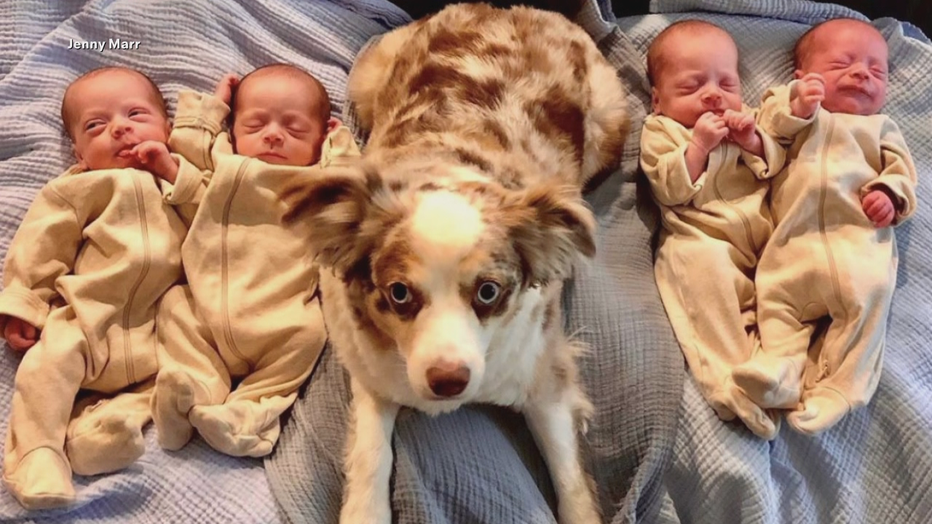 She admitted sometimes having trouble telling them apart.

“They’re identical!” she said. “I thought I had one baby and Chris was like, ‘No, that’s Harrison.’ Or that’s Henry. I don’t even really remember. And so they each have a little hemangioma. It’s like a little blood vessel birthmark. It’s temporary and so we hope it lasts until they can remember their names for us.”

And despite all the adorable social media posts, the new mom admitted there have been times where she could only cry.

Jenny said she felt like a horrible mother and cried for two days straight when Henry and Harrison developed diaper rashs.

“I’m like, ‘How did this happen? How did I let their little bottoms get like this?’ And then Henry was crying all night Saturday night. He just, he was super uncomfortable. And I just sat there like holding him and rocking him and crying, just crying,” she said.

Jenny said the most surprising thing about having all four boys home is that they are so noisy.

“They’re all sleeping and they all just grunt and make noises all day long. And so I’m constantly like, ‘Are you okay? What do you need?’ And so I thought that they would just kind of sleep a lot more and they do but it’s a lot of noises,” she said.

She’s also surprised at how much they are growing. For example, she said Henry is about 6 pounds now. He was only 2 pounds and 6 ounces when he was born.

There are only 72 recorded cases of identical quadruplets in the world and most are girls. The Marrs did not use any fertility drugs before conceiving their boys.