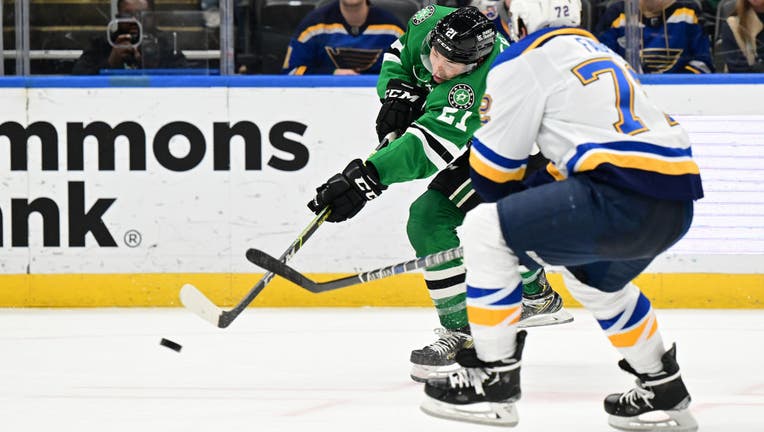 ST. LOUIS, MO - NOVEMBER 28: Dallas Stars leftwing Jason Robertson (21) shoots and scores a goal late in the game during a NHL game between the Dallas Stars and the St. Louis Blues on November 28, 2022, at Enterprise Center in St. Louis, MO. (Photo b

ST. LOUIS - Scott Wedgewood made 23 saves in an unexpected start and Wyatt Johnston broke a scoreless tie with a second-period goal to lead the Dallas Stars over the St. Louis Blues 4-1 on Monday night.

Jason Robertson, Ty Dellandrea and Miro Heiskanen also scored for Dallas, which has earned at least one point in eight of its last nine games.

Brandon Saad scored for St. Louis, which has lost three of four.

Jamie Benn had two assists for the Stars, who lead the Central Division with 30 points.

Wedgewood was scheduled to serve as Jake Oettinger's backup, but moved into the starting role after Oettinger became ill right before the game.

"As a backup, you’ve got to prepare in case of anything like this," Wedgewood said. "I took my nap, I ate my pregame meal. You’ve got to be ready."

Dallas coach Pete DeBoer was impressed with Wedgewood’s ability to adapt at the last minute.

"It takes a lot of character to be able to turn yourself on like that and then give us a game like he did in a critical moment," DeBoer said. "He didn’t know he was starting until essentially warmup game time. A last-minute illness came over (Oettinger) and he just couldn’t go."

Robertson extended his point streak to 16 games with a goal that made it 3-1 late in the third. Robertson has 17 goals and 12 assists during the run. He leads the NHL with 19 goals.

Heiskanen added an empty-netter to seal it.

"This was a playoff-type game for both teams," DeBoer said.

Johnston, who had his first multipoint game of the season, said Wedgewood set an early tone.

"He was able to close the door for us," Johnston said. "That was big. We were able to play with the lead and gain a lot of confidence."

Johnston whipped a wrist shot past Jordan Binnington at 3:51 of the middle period for his sixth goal of the season and second in three games. It capped an odd-man rush that began when St. Louis center Brayden Schenn misfired at the other end.

Dellandrea converted a pass from Johnston to make it 2-0 with 12:03 left in the third.

Saad trimmed the deficit in half by deflecting a drive from Josh Leivo from along the right wing.

Wedgewood made a diving glove save of a shot by Pavel Buchnevich in the first.

"Sometimes you’ve got to be good and lucky," Wedgewood said.

The Stars improved to 11-0 when leading after two periods.

"We were solid. We played 40 minutes," coach Craig Berube said. "We need more of an attack mentality in the third period."

St. Louis C Robert Thomas missed the game with a lower-body injury sustained in the third period of Friday’s 5-4 win over Florida. He is day-to-day. Thomas leads the team with 15 assists.

Stars: Host the Anaheim Ducks on Thursday in the first of five successive home games.