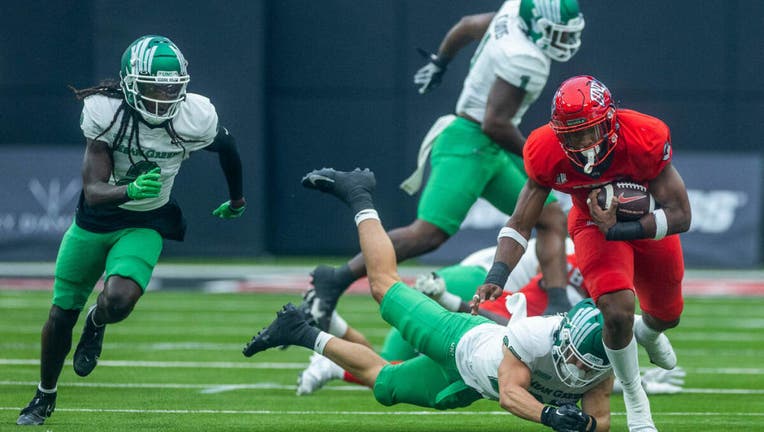 UNLV Rebels running back Aidan Robbins (9) avoids a tackle by North Texas Mean Green linebacker Sean-Thomas Faulkner (25) with others in pursuit during the first half of their NCAA football game at Allegiant Stadium on Saturday, Sept. 17, 2022, in La

Robbins a graduate transfer from Louisville, has seven touchdowns -- six rushing -- through three games. His 227 yards Saturday ranks eighth in UNLV single-game history. The Rebels had 365 yards rushing and outgained the Mean Green 576-467.

UNLV led 23-20 at halftime. Brumfield ran 8 yards for a touchdown that gave the Rebels a 10-point lead midway through the third quarter before UNLV secured the win in the final quarter with Robbins' third touchdown, Brumfield's 9-yard pass to Ricky White that completed a 99-yard drive and Cameron Oliver's 20-yard pick-6.

Austin Aune was 17-of-29 passing for 305 yards, two scores and two interceptions for the Mean Green (2-2). Kaylon Horton had a 99-yard kickoff return for North Texas' first points.