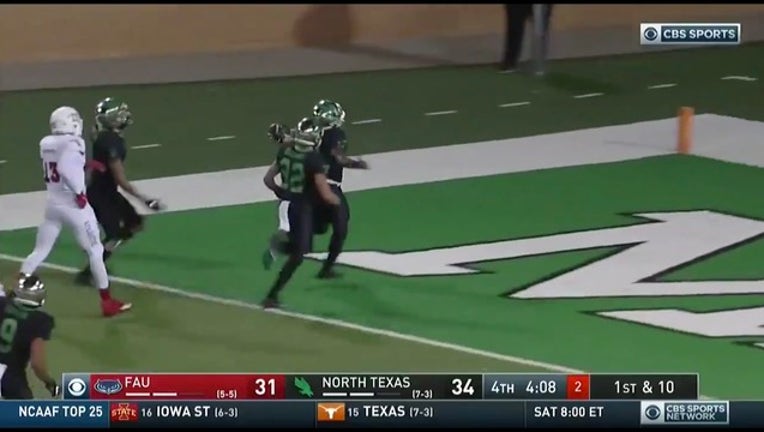 Mason Fine was 22-of-33 passing for 295 yards and two touchdowns with two interceptions for UNT (8-3, 4-3 Conference USA). The junior - who is already the program's career leader in completions, attempts and TD passes - left the game in the third quarter with an injury to his non-throwing hand. Backup Quinn Shanbour led back-to-back touchdown drives while scoring on runs of 5 and 18 yards before Fine returned.

The Owls (5-6, 3-4) scored 17 consecutive points to take a 24-21 lead early in the third quarter after Vladimir Rivas made a 31-yard field goal. Torrey ripped off a 46-yard run on the next play from scrimmage and, after Fine was injured two plays later, Shanbour scored from 5 yards out. Nate Brooks picked off a pass from Chris Robison three plays later and Shanbour's second TD run made it 34-24 with 6:33 left in the quarter.

Devin Singletary's 8-yard scoring run capped an eight-play, 75-yard drive on FAU's next possession and both offenses sputtered until Torrey's long TD run. Robison hit Jovon Durante for a 55-yard touchdown three plays later and the Mean Green went three-and-out on its next possession but Khairi Muhamad poked a pass from Robison high in the air and picked it off with 1:53 to go.

Singletary finished with 91yards rushing and two touchdowns and Harrison Bryant had six receptions for 138 yards and a score for FAU.

UNT, which had three yards rushing at halftime, finished with 511 total yards, including 208 on the ground.