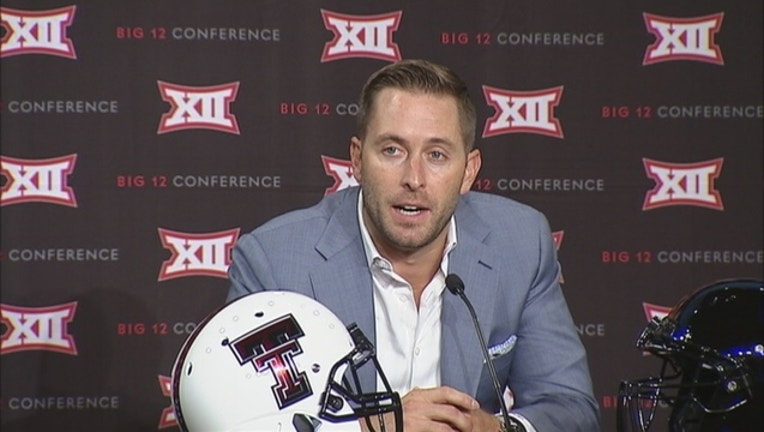 Sophomore Patrick Mahomes and junior Davis Webb will vie for the starting spot, and Kingsbury says the competition will make each better.

"It's the best I've ever felt as a coach as far as depth at a quarterback position, because we have two guys who've played games," said Kingsbury, in his third year as coach of his alma mater. "Both guys can get it done."

The Red Raiders finished 4-8 last season, ending four games below .500 for the first time since 1983 and with the fewest overall victories since 1990. They won just two Big 12 games, their fewest since the league began in 1996.

Kingsbury's quarterback decision will come before the end of fall workouts but the public may not know his choice until the opener at home Sept. 5 against Sam Houston State. His main criteria will be which one can protect the ball. Last year, the team had 28 turnovers. The previous season's tally was 33.

"That kind of tells you where we're at," Kingsbury said. "You can't do that and be successful."

On top of drastically reducing turnovers on offense, Kingsbury is hopeful the Red Raiders' eighth defensive coordinator since 2007, David Gibbs, can create some.

Gibbs, who led Houston's defense to back-to-back top 25 finishes nationally in turnovers, is the most experienced member of the Red Raiders' youthful coaching staff. He coached nine years in the NFL before moving to Houston for two seasons.

Last season, the Cougars snared 30 interceptions and fumbles from opponents. The year, before they got 43 turnovers.

"He brings instant credibility based upon where he's been in his resume," Kingsbury said. "We've already seen it."

Here are some things to watch this season at Texas Tech:

MAHOMES OR WEBB: Webb says he feels confident that experience will win him the starting spot: "Pat is going to be a good quarterback one day, but I feel like right now this is my chance to take advantage of this." Mahomes, who started the last three games last season, says his mobility helps his chances: "That helps out a lot, not so much just running but I can move around and make passes. create more time."

TURNOVERS AND PENALTIES: The Red Raiders look to reduce turnovers and penalties this season. Last year, Texas Tech had 28 giveaways landing them in a tie for 117th in the nation. The Red Raiders also really hurt themselves with penalties, finishing last in the nation in penalty yards per game (89.2).

RUN FIRST? Kingsbury is intimating just that, which would be a departure from the Air Raid offense. The Red Raiders' top three RBs last year — DeAndre Washington, Justin Stockton and Quinton White — gained 1,630 yards on 265 carries for a 6.1-yard average. Should Mahomes get the nod as starter, his ability to scramble and extend plays could meld well with a strong backfield. "If we can run it, we're going run it," Kingsbury said. "If we're not running very well, we'll try to throw it. But we're going to run it first."