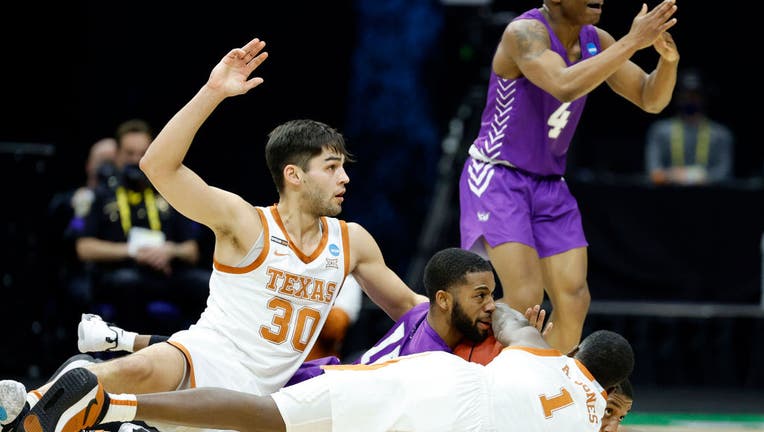 INDIANAPOLIS, INDIANA - MARCH 20: Reggie Miller #10 of the Abilene Christian Wildcats and Andrew Jones #1 of the Texas Longhorns battle for a loose ball during the second half in the first round game of the 2021 NCAA Men's Basketball Tournament at Lu

INDIANAPOLIS (AP) - Joe Pleasant slowed his breath and calmed himself.

In the most pressure-packed moment of his college career, the Abilene Christian junior forward was perfect on two free throws from a spot where he'd struggled in the past.

When he picked off a final desperation pass by Texas at midcourt, Pleasant and his teammates erupted in a celebration that nearly spilled into the stands.

Another double-digit seed is moving on in the NCAA Tournament, and this one at the expense of the flagship school in Abilene Christian's home state.

Abilene Christian and its frantic, havoc-causing defense bounced coach Shaka Smart and the Longhorns out of the NCAA Tournament in the first round yet again, as the 14th-seeded Wildcats stunned No. 3 seed Texas 53-52 on Saturday night.

Pleasant, a 58.8% foul shooter on the season, made two from the line with 1.2 seconds left, and the Wildcats took down their in-state rivals in the first meeting between the schools.

Pulling off one final upset in a first round filled with two years’ worth of excitement, Abilene Christian (24-4) became the fourth team seeded 13th or lower to reach the round of 32 in this NCAA Tournament, joining 15th-seeded Oral Roberts and No. 13 seeds Ohio and North Texas.

There was plenty of cheering for the Wildcats by their fans clad in purple as they caused all kinds of headaches for the bigger, more talented Longhorns and got just enough offense to pull off their first NCAA Tournament victory in their second appearance.

Pleasant finished with 11 points as did Coryon Mason for the Wildcats. Abilene Christian was blown out by Kentucky two years ago when it made its first trip to the NCAAs.

Now, the Wildcats will face No. 11 seed UCLA in the second round Monday.

"I felt like two years ago, we were kind of happy to be there as a first-time experience," Pleasant said. "Then this team, we’re ready to take on another challenge, not just to be here but to compete, to get some wins."

Andrew Jones scored 13 points for Texas (19-8) and was nearly the hero. Jones hit two free throws with 56 seconds left and his 3-pointer with 14 seconds remaining put the Longhorns in front 52-51.

ACU had one more chance. Damien Daniels drove to the basket but his shot was blocked by Kai Jones. Pleasant was first to get his hands on the rebound and Matt Coleman III was called for a foul, causing Smart to drop to his knees on the sideline.

"It was a loose ball. We both went for it. He got to the ball first and he threw it up and they called a foul on me. The ref called foul so I guess it was a foul," Coleman said.

After a timeout, Pleasant calmly hit both free throws. Then he intercepted a long pass by Texas, turning it into the Longhorns' 23rd turnover of the game and setting off a wild celebration that carried all the way off the court.

Pleasant waved his arms toward the crowd, egging on fans to make some noise and cupping his hand to his ear before being mobbed by teammates. Other players flexed toward ACU supporters in the stands of Lucas Oil Stadium that were definitely not socially distanced during the celebration.

"I was visualizing the free throws going in before I shot them," Pleasant said. "I was just trying to key in on the rim, just lock in and block out the noise."

There were heroes throughout for the Wildcats. Daniels, all of 5-foot-7 and 140 pounds, missed his first eight shot attempts but muscled through a foul to score on a drive with 3:42 left. The three-point play gave the Wildcats a 50-47 lead. Reggie Miller made one of two free throws to push the lead to four.

Texas went nearly four minutes without scoring before two free throws by Jones with 56 seconds left — foul shots that needed a pause to clean blood off the court.

Miller committed a turnover on ACU’s next possession and Jones’ 3 seemed set to be a perfect March moment after the Texas junior missed time earlier in his career after being diagnosed with leukemia.

Instead, the Longhorns are headed home with their third first-round exit under Smart, which will only raise the heat on his standing in Austin.

"A lot of tears in the locker room right now," Smart said. "A lot of guys extremely upset about the way the game ended, the fact that we have to go home now. Really disappointed, everybody is."

Texas was rolling coming into the NCAA Tournament after winning the Big 12 Tournament for the first time in school history. The Longhorns had won five straight overall and eight of 10 following a midseason slump.

But the Longhorns were too careless and too impatient against the Wildcats' swarming defense.

It was ugly, physical basketball, exactly the formula for the Wildcats to pull off the upset. They had the seventh-best scoring defense in the country this season, giving up just 60 points per game, and led the nation in forcing turnovers. They smothered Nicholls State 79-45 in the Southland Conference title game.

Texas was held 23 points below its season average. The 23 turnovers were the most for the program in eight years, and the Longhorns took 27 fewer shots than ACU.

"It just doesn’t feel real. I feel like I’m trying to wake up from a bad dream," Coleman said.