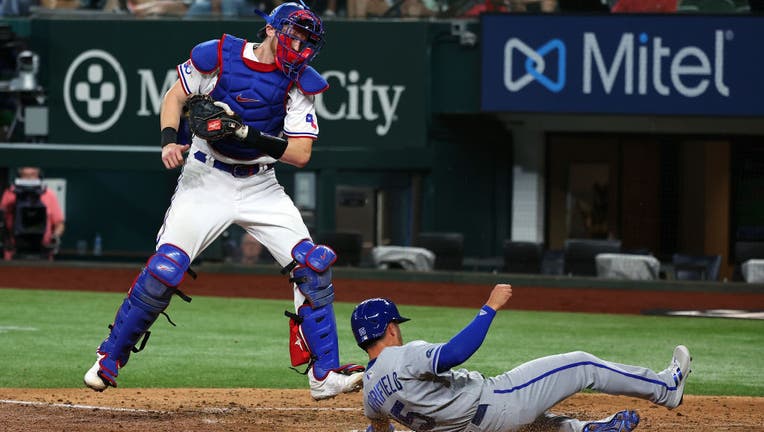 ARLINGTON, TEXAS - MAY 11: Sam Huff #55 of the Texas Rangers gets the ball late as Whit Merrifield #15 of the Kansas City Royals scores in the seventh inning at Globe Life Field on May 11, 2022 in Arlington, Texas. (Photo by Richard Rodriguez/Getty I

Emmanuel Rivera padded a three-run Royals lead in the ninth inning, clearing the bases with a two-out, pinch-hit triple.

Witt Jr., the second overall pick in the 2019 draft out of nearby Colleyville High School, smashed a first-pitch slider into the left-field corner in the fifth inning. The rookie drove Merrifield home from third base in the seventh on a tapper to third, with Brad Miller’s throw home late.

"It’s always great just to be able to play with friends, family and a lot of people in front of you and be able to live out my dream and be able to see them out there supporting," said Witt, who was hitless in his first six at-bats in this series.

Merrifield also hit a first-pitch slider into the left-field seats in the third for his first home run in 255 at-bats. The two-time AL hits leader came in with a .139 batting average and enjoyed his first three-hit game of the season. It was his first multi-run game of the year.

"I really haven’t been as frustrated as you might think based on my numbers," Merrifield said. "I’ve felt really good. And if I feel good, I know stuff’s going to turn around."

Miller and Corey Seager hit solo homers for Texas. It was Seager’s third in two games. Miller’s came as a pinch hitter in the sixth, his second pinch-hit homer in four days.

The Royals won the battle of openers, forced by both teams having multiple rainouts last weekend and playing Sunday doubleheaders and Monday makeup games.

Joel Payamps (1-1), the second of six Kansas City pitchers, allowed two singles in three innings to earn the victory, striking out five and walking none. The three innings matched the most of Payamps’ four-year big-league career, set in his debut against Colorado in August 2019.

Kolby Allard (0-2) was the second of Texas’ six pitchers after being called up from Triple-A Round Rock earlier in the day. Allard gave up Merrifield’s homer among two hits and a walk in three innings.

The Rangers committed four errors and had a wild pitch that contributed to a Royals run.

"There wasn’t really much good," said Texas manager Chris Woodward, whose team came in having won six of its last eight.

EVEN BIGGER DAY FOR WITTS

One day after Witt played his first game against the franchise that he grew up cheering, Bobby Witt Sr. turned 58 on Wednesday. The elder Witt pitched 11 of his 16 big league seasons with the Rangers.

Rivera hit the first three-run pinch-hit triple in franchise history. ... With Allard’s recall, Rangers OF Zach Reks was optioned to Round Rock. ... Speier’s grand uncle is Chris Speier, the former major leaguer (1971-89) and coach (2000-20). ... The Rangers announced they will induct former 2B Ian Kinsler and longtime public relations director John Blake into the team’s hall of fame in mid-August.

Royals: RHP Jonathan Heasley will be recalled from Triple-A Omaha to make his season debut with Kansas City in Thursday night’s series finale. The Dallas resident who attended Plano’s Prestonwood Christian Academy had a 4.44 ERA in six starts this season with Omaha. Kansas City must make room on the roster for Heasley.