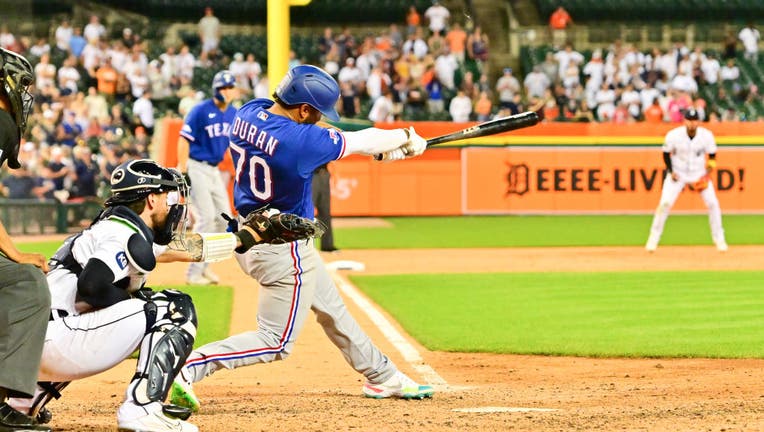 DETROIT, MI - JUNE 16: Texas Rangers second baseman Ezequiel Duran (70) lines a triple down the first base line to drive in three runs in the top of the ninth inning during to the Detroit Tigers versus the Texas Rangers on Thursday June 16, 2022 at C

DETROIT (AP) - Ezequiel Duran hit a three-run triple with two out in the ninth inning to give the Texas Rangers a 3-1 win over the Detroit Tigers on Thursday night.

"That kid has ice water in his veins," Rangers manager Chris Woodward said. "The Tigers have a great closer who is throwing 100 mph, and Ezequiel has no fear, even in a spot like that."

Tigers closer Gregory Soto loaded the bases on two walks and a hit batter before Duran hit a ball just inside first base and into the right-field corner. All three runners scored, giving Soto his second blown save of the season.

"I've been dreaming about this for a long time," said the 23-year-old Duran, who is hitting .319 since making his major-league debut on June 4. "I have a lot of faith in myself, and I was ready for anything he threw."

Dennis Santana (3-2) picked up the win with a scoreless eighth inning, and Joe Barlow pitched the ninth for his 12th save.

"Gregory lives on the edge some of the time and today it was a bit too much," Tigers manager A.J. Hinch said. "Beau did a great job of attacking hitters and staying ahead in the counts."

The Tigers have been outscored 36-7 in the losing streak, and are averaging 2.68 runs — the worst mark by any team since World War II.

"There's no secret that we aren't scoring runs, so we have to try to do anything we can to score every run possible," Hinch said.

Texas starter Martin Perez extended his unbeaten streak to 11 games. He allowed one run on eight hits in seven innings.

"The reason I care about that streak is because I don't have to have games where I cost us the game," Perez said. "Today, I kept us close, and the kid did it again. I wish I could have had that kind of poise when I was his age."

The Tigers had the first good scoring chance, as Miguel Cabrera singled in the third with two out and Eric Haase at second. Haase tried to score, but was easily thrown out by right-fielder Adolis Garcia.

"Garcia obviously has a great arm, but again, we have to do anything we can right now to score a run," Hinch said.

Jonah Heim bunted against the shift for a single to start the fifth. Nathaniel Lowe followed with a hit, but Duran lined to shortstop Javy Baez, who doubled Heim off second.

Brieske walked two batters in the sixth, but picked Marcus Semien off first and got out of the inning thanks to Spencer Torkelson reaching deep into the Rangers' dugout to grab Garcia's foul pop.

Baez's ground-rule double gave the Tigers runners on second and third in the bottom of the sixth, and Grossman ended Detroit's 22-inning scoreless streak with a sacrifice fly to right.

The Rangers activated RHP Jose Leclerc from the 60-day injured list and LHP Brett Martin from the COVID-19 list, with RHP Tyson Miller and LHP Koby Allard headed to Triple-A Round Rock.