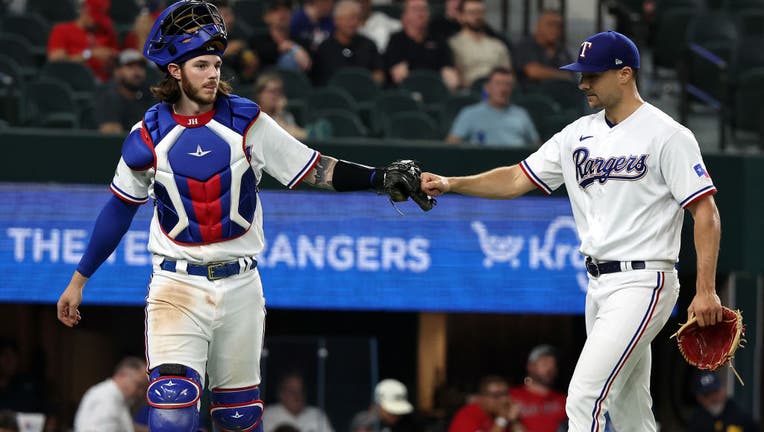 ARLINGTON, TEXAS - MAY 16: Jonah Heim #28 of the Texas Rangers fist bumps pitcher Brock Burke #46 in the sixth inning against the Los Angeles Angels at Globe Life Field on May 16, 2022 in Arlington, Texas. (Photo by Richard Rodriguez/Getty Images)

ARLINGTON, Texas - Eli White had the first and last of five Texas hits during a six-run first inning against Noah Syndergaard, and the Rangers beat the Los Angeles Angels 7-4 on Monday night.

Jon Gray won his home debut despite allowing Shohei Ohtani’s RBI double off the base of the center-field wall in a three-run first. The Rangers’ immediate response knocked out Syndergaard, a local high school standout, after two-thirds of an inning.

Gray said the Rangers’ offensive response "gives you another chance."

"After a rough first inning like that, you feel like you’ve always lost the game," he added.

Jonah Heim hit a solo home run to center in the seventh, just beyond the reach of Mike Trout, for his second RBI.

Joe Barlow worked around a leadoff walk in the ninth for his seventh save in seven chances, and center fielder Adolis García ended the game with his second shoestring catch of the night, on Taylor Ward. The Rangers are 8-5 in May after going 7-14 in April.

White led off for Texas and had two RBIs, a stolen base and a run in the first. His second single came off Jaime Barria, a starter for much of his big league career and the first of three Los Angeles relievers. Barria pitched 4 1/3 innings and threw 62 pitches to Syndergaard’s 42.

Gray (1-1) gave up four runs and eight hits while striking out eight as he set season highs with 5 2/3 innings and 89 pitches. He left two previous starts with injuries, going on the 10-day injured list each time, and pitched Monday with a brace on his left knee.

"After we got that six, (Gray) settled down and won us the game," Texas manager Chris Woodward said.

"When it rains, it pours," said Syndergaard, who missed most of the last two seasons with the New York Mets because of injuries. "I’ve got to have a short-term memory, but I also (must) learn from mistakes, learn from this outing and make sure it never happens again."

García followed Sunday’s two-homer outing with an RBI double to the warning track in left-center for the Rangers’ only extra-base hit of that inning.

Ohtani doubled on a 3-0 fastball.

The Angels were 4 for 10 with runners in scoring position. In addition to Garcia’s two running catches, Texas shortstop Corey Seager made a backhand stop deep in the hole on Trout to start a double play in the seventh to snuff out a potential rally.

Angels rookie LHP Reid Detmers on Tuesday has a chance to match Johnny Vander Meer’s feat of consecutive no-hitters after throwing one against Tampa Bay on May 10 in his 11th major league start.

"I’m preparing just like any other start," said Detmers, named the AL’s player of the week earlier Monday.

"We’ve got to do whatever we can to disrupt him, to make him uncomfortable," Woodward said. "Put some heat on him."

Ohtani’s fourth three-strikeout game of the season was his first since April 22. … White’s two-hit inning was Texas’ first since Isiah Kiner-Falefa on Sept. 28, 2019, against the New York Yankees. … Brandon Marsh’s two-run opposite-field double to shallow left in the first extended his hitting streak to seven games, matching his career best.