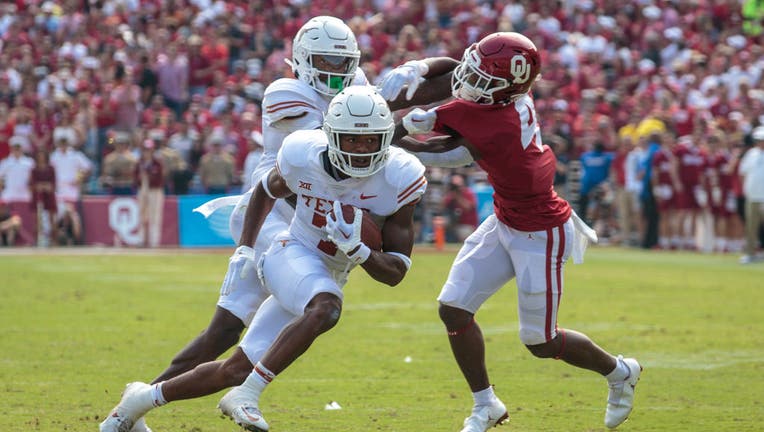 DALLAS, TX - OCTOBER 08: Texas Longhorns running back Keilan Robinson (7) runs towards the end zone during the first half against the Oklahoma Sooners on October 8th 2022 at the Cotton Bowl Stadium in Dallas Texas. (Photo by William Purnell/Icon Spor

DALLAS (AP) - Quinn Ewers threw for 289 yards and four touchdowns in his return to the Texas lineup and the Longhorns handed Oklahoma its most-lopsided shutout loss ever, 49-0 on Saturday in the first meeting between the Red River rivals since 1998 with neither ranked.

Bijan Robinson ran for 130 yards and two touchdowns for the Longhorns (4-2, 2-1 Big 12), who snapped a four-game losing streak in the series that dates to 1900 -- a skid that began with the 2018 Big 12 championship game in the only of their 118 meetings outside the regular season. Tight end Ja'Tavion Sanders had two TD catches.

While Ewers was back after missing three games, the Sooners (3-3, 0-3) were without starting quarterback Dillon Gabriel, who warmed up but didn't play a week after getting hit in the head and knocked out of the TCU game because of a concussion. Pitt transfer Davis Beville got the start, but Oklahoma opted for numerous wildcat plays without the quarterback and finished with only 39 yards passing and 195 overall.

The 92,100-seat Cotton Bowl Stadium was full for the start of the annual meeting at the State Fair of Texas, with fans in crimson and burnt orange split at the 50-yard line as usual. But long before this game was over, the Sooners side was emptying while Texas fans stayed to relish every moment.

After a 3-0 start with new coach Brent Venables, Oklahoma has its first three-game losing streak since 1998. The Sooners lost five in a row that season, including an 0-4 start in Big 12 play before a 29-0 loss to Texas A&M that was their last shutout until Saturday. Their largest shutout loss had been 47-0 to Oklahoma State in 1945.

Ewers completed 14 of his first 16 passes and finished 21 of 31 in his first action since a collarbone injury he sustained in the first quarter against top-ranked Alabama four weeks ago. The strong-armed freshman from nearby Southlake, who spent last season at Ohio State, was 9 of 12 for 134 yards against the Crimson Tide before getting hurt.

Texas had two 90-yard scoring drives in the first quarter, capped by Robinson's 2-yard run and Xavier Worthy's 10-yard catch. In between those touchdowns, Oklahoma converted a fake field goal, only to get stopped on fourth-and-2 inside the 10 four plays later.

Texas: The Longhorns had a balanced 585 total yards of offense, with 289 passing and 296 rushing. A year after building a 28-7 lead in the first quarter against Oklahoma before losing 55-48 in the highest-scoring game in the series, Texas went ahead 21-0 on Keilan Robinson's 15-yard TD catch midway through the second quarter, and added on from there.

Oklahoma: With Gabriel not playing, the Sooners had plenty of plays with running back Eric Gray or tight end Brayden Willis taking direct snaps. The Sooners averaged 5.8 yards per carry before halftime, and still trailed 28-0. Along with the fourth-down stop inside the 10, they were driving late in the second quarter when Gray took a direct snap from the 20, ran forward a few steps and then threw a jump pass right to Texas' Jahdae Barron.

Oklahoma is home against No. 19 Kansas next Saturday.