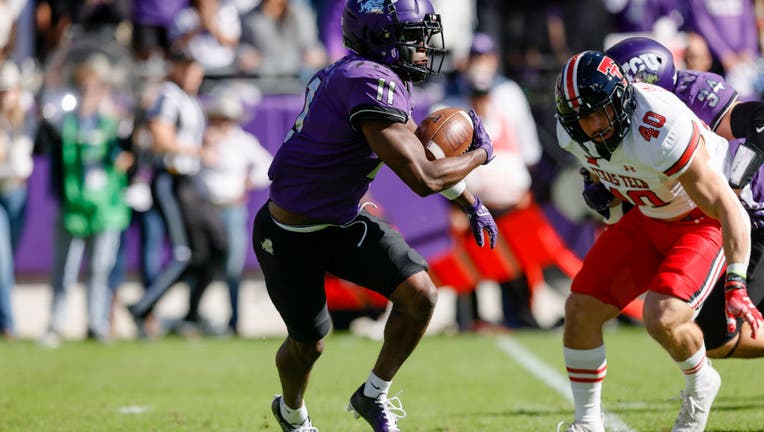 FORT WORTH, TX - NOVEMBER 05: TCU Horned Frogs wide receiver Derius Davis (11) returns a punt during the game between the TCU Horned Frogs and the Texas Tech Red Raiders on November 5, 2022 at Amon G. Carter Stadium in Fort Worth, Texas. (Photo by Ma

FORT WORTH, Texas (AP) - Derius Davis returned the first punt 82 yards for a touchdown, Kendre Miller ran for the go-ahead score early in the fourth quarter and No. 7 TCU pulled away in a 34-24 victory over Texas Tech on Saturday.

Davis caught one of Max Duggan's two fourth-quarter TD passes as the Horned Frogs reached 9-0 for the first time since 2010, a 13-0 season that ended with a Rose Bowl victory and No. 2 national ranking.

RELATED: From backup QB to Heisman contender, Max Duggan is leading TCU on a historic season

The previous perfect run for TCU (6-0 in Big 12 this season) came in the Mountain West Conference and was before the College Football Playoff.

The nine-game winning streak is the longest since the Horned Frogs won 16 straight over the 2014-15 seasons. In 2014, one-loss TCU had joined the Big 12 but was left out of the first four-team CFP.

The Red Raiders (4-5, 2-4) went ahead 17-13 in the third quarter on Tyler Shough's 33-yard touchdown pass to J.J. Sparkman, but ended up falling to 2-4 against ranked teams in coach Joey McGuire's first season.

Defensive standout Tyree Wilson made the first big play for Texas Tech with a fourth-down tackle for loss when TCU was driving up 7-0 after Darius' return up the right sideline and back toward the middle.

Wilson, though, sparked the Horned Frogs' go-ahead drive with a facemask penalty when his sack of Duggan would have put TCU in third and long.

A pass interference penalty in the end zone put the ball at the 2-yard line, and Miller extended his rushing TD streak to 10 games on the next play for a 20-17 lead.

Miller surpassed 100 yards rushing for the sixth time in seven games, finishing with a season-high 158 yards on 21 carries. Duggan was 12 of 23 for 195 yards without an interception, giving him 24 TDs and two picks.

The Red Raiders started 3 of 3 on fourth down, but failed on consecutive possessions in their territory after Miller's TD, setting up Duggan's 23-yard scoring pass to Davis and a 16-yarder to Emari Demercado.

Freshman Behren Morton started strong for Texas Tech, going 7 of 10 with a 47-yard touchdown to Jerand Bradley. But he left with a lower left leg injury in the first half.

Shough, the opening day starter who has missed most of the season with a shoulder injury, went 9 of 22 for 84 yards and had a short touchdown run late.

Texas Tech: The Red Raiders had one interception after entering the game with a Big 12-leading 15. While they protected the ball better, the league's No. 1 passing offense was held under 200 yards (163) for the second week in a row after not having fewer than 299 before that.

TCU: The nine-game winning streak is the longest as a head coach for Sonny Dykes, in his first season with the Horned Frogs. Dykes, who was facing his alma mater and the school where he was an assistant, is the first Big 12 coach to go this deep into his first season without losing.

Texas Tech: After playing ranked opponents six of the first nine games, the Red Raiders don't have a team currently in the Top 25 on their remaining schedule. Kansas visits next Saturday.

TCU: The Horned Frogs play at Texas. They lost to the Longhorns for just the second time in the past eight meetings last year in Fort Worth.