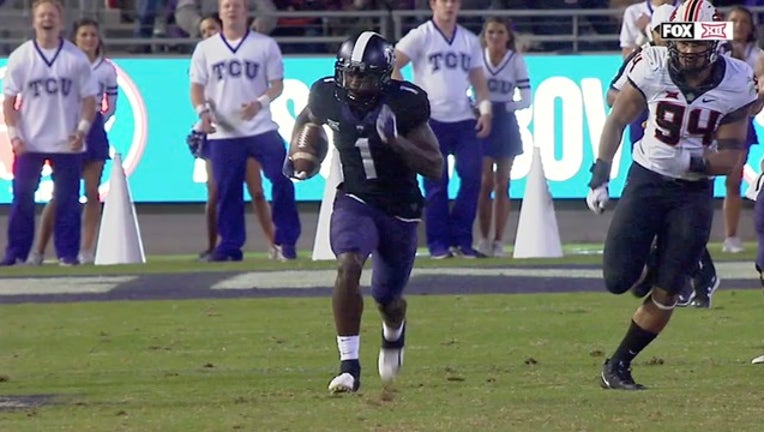 FORT WORTH, Texas (AP) - Jawuan Johnson scooped up a fumble and returned it 15 yards for a touchdown on the first play of the second half, Jalen Reagor ran 83 yards for a score on TCU's first offensive snap after halftime and the Horned Frogs got bowl eligible with a 31-24 victory over Oklahoma State on Saturday night.

Reagor also had a 6-yard TD catch for the injury-plagued Horned Frogs (6-6, 4-5 Big 12), who will go to a bowl for the 16th time in Gary Patterson's 18 seasons as head coach after winning three of their last four games. It will be their 19th bowl in the last 21 seasons overall, including Patterson's three years as TCU's defensive coordinator for Dennis Franchione.

Oklahoma State (6-6, 3-6) had only 58 total yards after Johnson's defensive score set up on a pass behind the line that went off the hands of freshman running back Chuba Hubbard. Reagor's TD run made it 21-3 only 73 seconds into the second half.

Taylor Cornelius had 156 of his 181 yards passing after halftime, when he twice ran for scores to get the Cowboys within a touchdown. Chuba Hubbard also had a 3-yard TD run.

It was the second week in a row that Reagor, a speedy sophomore receiver, had touchdowns receiving and rushing. He finished with eight catches for 91 yards, and became only the third TCU player with a 1,000-yard receiving season (1,061).

TCU's fifth-year senior Grant Muehlstein got his first career start in his regular season finale because of injuries to the top two quarterbacks.

Oklahoma State: The Cowboys were coming off a 45-41 win over then-No. 7 West Virginia that got them bowl eligible, which came after a 48-47 loss at No. 6 Oklahoma because of a failed 2-point conversion with 1:03 left. And they won 38-35 last month over Texas, which will play the Sooners in the Big 12 title game. But they also had double-digit losses to two teams in the bottom half of the standings and blew a 10-point lead in the fourth quarter in a loss at Baylor earlier this month.

TCU: The Horned Frogs scored more than 30 points in a Big 12 game for the first time this season, and needed all of them. All three of their previous conference wins this season had been when they scored 17 points or less.

Justice Hill, the Big 12's third-leading rusher, missed his second game in a row for Oklahoma State because of bruised ribs. The junior tailback is still 70 yards shy of joining Terry Miller (1975-77) as the only Cowboys running backs with three 1,000-yard rushing seasons.

Oklahoma State will play in a bowl game for the 13th consecutive season.

TCU, like Oklahoma State, is waiting to see where it will play in a bowl game.