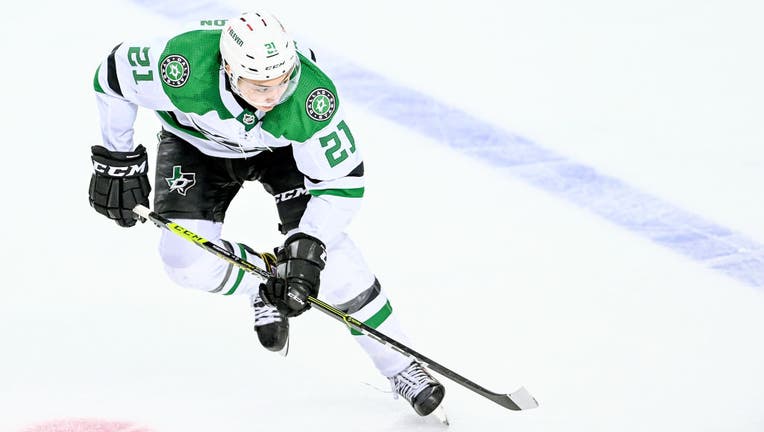 CALGARY, AB - MAY 15: Dallas Stars Left Wing Jason Robertson (21) in action during the third period of game 7 of the first round of the NHL Stanley Cup Playoffs between the Calgary Flames and the Dallas Stars on May 15, 2022, at the Scotiabank Saddle

The Stars announced the deal late Wednesday night, after their exhibition game in Denver, only a week before the regular season opener Oct. 13 at Nashville.

Robertson turned 23 soon after the end of last season, when the left wing had 41 goals and 38 assists for 79 points in his 74 games. His 13 power-play goals led the team. Robertson joined Hockey Hall of Famer Mike Modano, Jamie Benn and Tyler Seguin as the only 40-goal scorers since the franchise moved to Dallas in 1993.

"Jason is an integral part of the present and future of our team and we’re thrilled to have him for the next four years," general manager Jim Nill said.

Dallas Stars to kick off preseason with a new coach, big contract extension

Dallas Stars to kick off preseason with new coach

The Dallas Stars are now weeks away from the start of a new season with a new coach and a big new contract to keep the team's goaltender. Good Day talked to Stars President and CEO Brad Alberts about the team and head coach Pete Deboer's debut.

A second-round draft pick (39th overall) by the Stars in 2017, Robertson has 125 points (58 goals, 67 assists) in his 128 NHL games. The 6-foot-3 California native had one goal and three assists in his first postseason action last season, when Dallas lost its first-round playoff series in seven games against Calgary.

"Since he was drafted by our organization, he has worked tirelessly to become a better player every day. His knack for scoring goals and seeing plays develop on the ice are just some of the tremendous assets that he brings to our team," Nill said. "He is one of the best young players in the NHL, and we look forward to seeing him continue to progress."

Before the start of this season's camp, new coach Pete DeBoer said he looked forward to coaching Robertson.

"Listen, I laid awake at night with the excitement of coaching Jason Robertson, 40-plus goals, but he’s not here," DeBoer said then. "So, you know, until he gets here, I can’t spend any energy on that."

Robertson will finally be there now.