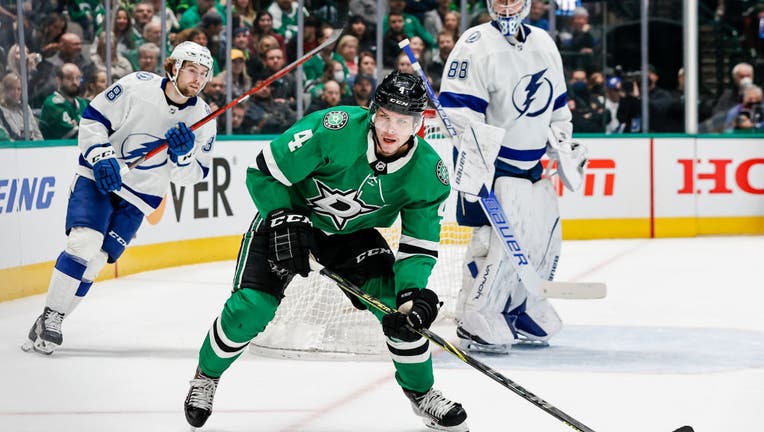 DALLAS, TX - APRIL 12: Dallas Stars defenseman Miro Heiskanen (4) chases the puck in the corner during the game between the Dallas Stars and the Tampa Bay Lightning on April 12, 2022 at the American Airlines Center in Dallas, Texas. (Photo by Matthew

DALLAS - Roope Hintz and the Dallas Stars are in a fight for a playoff spot in the Western Conference, while it's just a matter of time for two-time defending Stanley Cup champion Tampa Bay in the East.

The Stars will take the two points from a tight battle between teams with some recent postseason history.

Hintz scored with 4:50 remaining and the Stars forced the Lightning to wait at least another day to clinch a playoff berth with a 1-0 victory Tuesday night.

"That was huge for our group," said Luke Glendening, who almost had an empty-netter late after creating several short-handed chances for himself in the second period. "I thought to a man everyone really competed tonight. It's fun to see when everybody's pulling on the same rope."

Dallas moved three points ahead of Vegas for the second of two wild cards in the Western Conference. The Stars have nine games remaining, one more than the Golden Knights, who lost to Vancouver 5-4 in overtime.

Tampa Bay could have secured a fifth consecutive playoff appearance and eighth in the past nine years with a victory. The first of those two Stanley Cup titles came against the Stars in the 2020 playoff bubble in Canada.

Dallas topped Tampa Bay at home for just the second time in eight games, and beat goalie Andrei Vasilevskiy for only the second time in 17 games. The Lightning have allowed two goals in regulation in the past three games, but are 1-1-1.

"It's unfortunate that we only have three points to show for it. That's tough," coach Jon Cooper said. "Sometimes that can be frustrating. But if we're going to give up zero and one goal a game, I'll take our chances."

Good scoring chances on both ends had come up empty before a shot by Jason Robertson created a scramble that ended with Joe Pavelski passing from behind the end line to Hintz in the slot.

Scott Wedgewood stopped 25 shots for his first shutout since joining the Stars in a trade with Arizona. It was the fifth of his career.

After Glendening couldn't quite win the race to a puck with an empty net in front of him, the Stars held off a mad scramble at 6-on-5 in the final minute.

Tyler Seguin, stung by a blocked shot earlier, was dinged again in the final 10 seconds when he stymied a shot from Victor Hedman.

"It's a lot of desperation. They were great in front of me all night," said Wedgewood, whose only loss in four starts for Dallas was in overtime. "Probably the best-structured game I've been a part of on both sides of the puck."

With the game scoreless in the third, Glendening had a breakaway off a steal, but Vasilevskiy made a glove save. Just 36 seconds later, Ondrej Palat had a point-blank chance at the other end, and Wedgewood made a pad save.

Dallas defenseman Esa Lindell was penalized twice in the second period, but the Stars ended up with better scoring chances than the Lightning on both penalty kills.

After Lindell was called for cross-checking midway through the second, Dallas spent most of the second minute in its offensive end, and Vasilevskiy had to make two saves on shots by Glendening.

Hintz and Tampa Bay's Nikita Kucherov collided near center ice in the second period, leaving both players stunned as they picked up sticks that had been jarred loose. Kucherov went straight to his bench. Both stayed in the game.

Glendening had another chance in the final seconds of Lindell's high-sticking penalty late in the second, but a backhand went just wide.

NOTES: Jamie Benn of Dallas and Tampa Bay's Nicholas Paul had a lengthy fight without any significant punches thrown, or landed, midway through the first period. It finally ended when Paul lost his footing as Benn threw a couple of punches that went over the top of him. ... The Stars' Vladislav Namestnikov didn't return after the first period because of a lower-body injury.

Lightning: A five-game homestand, the longest of the season, starts Thursday against Anaheim. Tampa Bay is in a stretch of 11 of 13 games at home.

Stars: Minnesota visits Thursday. The winning team has scored at least six goals in each of the three meetings this season. Dallas has 7-4 and 6-3 victories. The Wild took the first matchup 7-2.