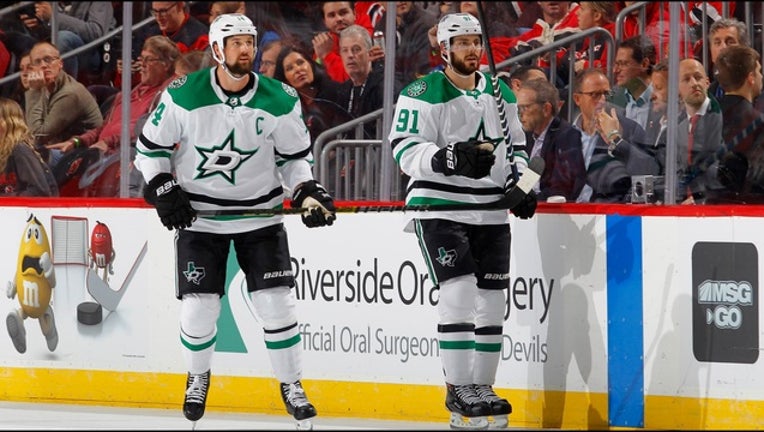 Jamie Benn #14 and Tyler Seguin #91 of the Dallas Stars in action against the New Jersey Devils at Prudential Center on October 16, 2018 in Newark, New Jersey. The Devils defeated the Stars 3-0. (Photo by Jim McIsaac/Getty Images)

Lites requested the interviews, saying he believed Seguin and Benn deserved more public criticism with a team Lites says is underachieving. Dallas started the day holding the final playoff spot in the Western Conference but has expectations of a higher finish.

The longtime Stars executive told The Athletic that the Stars would be in danger of missing the playoffs for the ninth time in 11 seasons without better play from Benn and Seguin. Lites told The Dallas Morning News both players "think it's easy, and that's what bothers me."

Seguin and Benn are the team's top two scorers with 32 and 30 points respectively in 38 games. Seguin leads with 21 assists, Benn with 15 goals.

But neither is in the top 50 in the NHL in points after both finished at least among the 20 best their first four years together before that run ended last season. Benn led the league in points in 2014-15.

Both players said they needed to improve after being told by The Athletic that Lites was critical of them.

"Not good enough," Seguin told The Athletic. "I'm trying to do a job, and I haven't had the right results."

Said Benn, "I think it's pretty self-explanatory. If this team wants to get to the next level, that starts with myself."

No player in the league has hit more posts and crossbars combined than Seguin. That's no excuse to Lites.

"He's hitting posts, 'wah-wah.' That's what I say about hitting posts," Lites told The Athletic. "Get a little bit closer to the action, actually go to the spot where you score goals. He doesn't do that, he never does that anymore. He used to be a pest to play against, people hated playing against Tyler Seguin. They don't anymore."

Lites told The Athletic that Gaglardi expressed frustration over the play of Seguin and Benn as recently as during a 2-0 win at Nashville on Thursday, when goalie Anton Khudobin set a club record in a shutout with 49 saves.

The Stars have become one of the better defensive teams under first-year coach Jim Montgomery after years of struggling at the blue line. But now they're in the bottom third of the league in scoring.