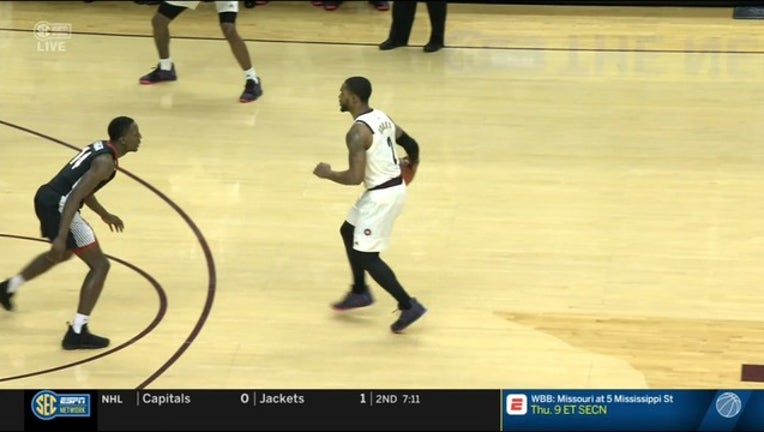 COLLEGE STATION, Texas (AP) - When the Texas A&M Aggies were struggling through a stretch where they dropped six of seven games, coach Billy Kennedy maintained the same upbeat and optimistic attitude with his team.

That, his players say, is what helped them get on track and win their last two games, capped by Tuesday night's 73-56 victory over Georgia.

"Coach Kennedy is always positive," Jay Jay Chandler said. "No matter how many losses we have he's always positive. We just follow him. He comes in with the same attitude of getting better."

TJ Starks had 19 points and Chandler added 18 to help Texas A&M roll to the win.

Georgia coach Tom Crean shared what he spoke to his players about as their skid continued.

The Aggies (10-13, 3-8), who won at Missouri on Saturday to snap a three-game skid, got their first home SEC win by downing the Bulldogs and won consecutive games for the first time since December.

"Finally getting a conference win at home is big," Chandler said. "It brings a lot of momentum."

The Bulldogs cut the lead to eight after three free throws by Jordan Harris early in the second half. But Texas A&M scored the next six points, with three each from Christian Mekowulu and Wendell Mitchell, to make it 40-26 with about 16 minutes remaining.

Nicolas Claxton ended the run with a 3-point play for Georgia, but the Aggies added seven quick points after that to push the lead to 47-29. John Walker had a dunk in that stretch before a steal and a dunk by Starks and a 3 by Chandler.

"We had good poise," Kennedy said. "They had to press and take some chances and we moved the ball better than we have been."

Georgia was led by Claxton, who had 18 points and 10 rebounds, and Harris added 10 points.

Mekowulu had 15 points and a career-high 15 rebounds for the Aggies. Crean raved about his performance.

"He played fantastic," Crean said. "He played with great force. If he plays like that they'll get better all the time."

The Aggies were still up by 18 with about seven minutes left before Claxton scored the first five points of a 7-2 run that cut the lead to 61-48. But Texas A&M used a 4-1 spurt, with a jump shot by Starks, after that to push the lead to 65-49 with about four minutes left and cruise to the victory.

Georgia: The Bulldogs haven't won since a non-conference victory over Texas on Jan. 26 and could see their conference losing streak stretch to double digits with a visit from No. 19 LSU coming up on Saturday.

Texas A&M: The Aggies handled business on Tuesday night against a struggling team, but will need to play better if they hope to keep their winning streak going.

Kennedy was impressed with the game by Starks, who also had three assists and four steals with just one turnover: "That's one of the most efficient games he's played and one of the best stat lines he's had since he's been here."

The Aggies got a big boost from their bench, which outscored Georgia's reserves 39-10, led by Starks and Chandler. The solid play of the bench came on a night when leading scorer Mitchell finished with just nine points and third-leading scorer Savion Flagg had only seven.

Georgia: Hosts No. 19 LSU on Saturday.