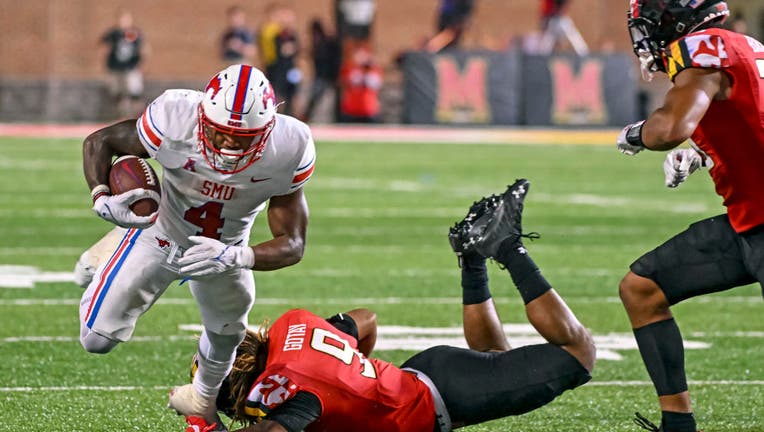 COLLEGE PARK, Md. (AP) - It was a game that unfolded largely as advertised: Taulia Tagovailoa and Tanner Mordecai — two talented quarterbacks leading explosive-but-flawed teams — showed they could move the ball quickly and effectively when they avoid mistakes.

Mordecai passed for more yards and more touchdowns, but he also turned the ball over three times.

Tagovailoa threw a 5-yard touchdown pass to Corey Dyches with 7:30 remaining, and Maryland held on for a 34-27 victory over SMU on Saturday night. Roman Hemby ran for 151 yards and a touchdown for the Terrapins, who overcame 15 penalties.

"We did not play our best football today. Let’s make no mistake about it. A lot of errors, a lot of penalties, a lot of turnovers," Maryland coach Michael Locksley said. "But it was against a really, really good team. ... To find a way to win, we needed a game like that."

The Mustangs (2-1) had three of the game's five turnovers, and they lost the ball on downs at the Maryland 9 when Mordecai's fourth-down pass to the end zone sailed high with 2:31 remaining.

SMU got the ball back one more time but turned it over on downs again near midfield with 46 seconds left. Mordecai threw for 369 yards and three touchdowns, but he also had two interceptions and lost a fumble.

Tagovailoa passed for 214 yards and two TDs, and he avoided any interceptions.

That's not to say the Terps played a clean game. Maryland trailed 20-17 at halftime, and the Terrapins (3-0) wasted an opportunity early in the third quarter after driving to the SMU 6. A touchdown pass from Tagovailoa to Jeshaun Jones was wiped out by a holding penalty, and Jones was also called for unsportsmanlike conduct, putting Maryland in a third-and-goal situation back at the 31.

The Terps did manage a field goal to tie the game, but on SMU's next drive, they were flagged for unsportsmanlike conduct, roughing the passer and pass interference. The Mustangs were poised to take the lead back, but a fumble by Mordecai inside the Maryland 5 ended that drive.

That miscue didn't end up being that costly. The Mustangs quickly forced a punt and took over at the Maryland 37. They took a 27-20 lead on a 7-yard scoring pass from Mordecai to Moochie Dixon.

SMU then got the ball back near midfield after a Maryland fumble, but a missed field goal kept the lead at seven, and the Terps drove to tie it on a 1-yard run by Hemby.

After an interception by Dante Trader, Maryland had a chance to take the lead. The Terrapins went for it on fourth-and-9 from the SMU 45. Dyches caught a pass a couple yards short, but he dragged linebacker Jimmy Phillips across the line to gain.

"That's the effort," Locksley said. "Our team's effort for three games has been exactly what we want out of our team."

Moments later, the touchdown by Dyches made it 34-27.

SMU led 13-3 in the second quarter after a 51-yard TD strike from Mordecai to RJ Maryland. Antwaine Littleton scored on a 1-yard run for the Terps, and after Mordecai threw an interception, Tagovailoa found Rakim Jarrett for a 48-yard touchdown to put Maryland momentarily ahead.

Mordecai's 13-yard TD pass to Austin Upshaw put SMU back in front with 2:42 left in the half.

SMU: The Mustangs rolled up 518 yards of offense, but SMU's turnovers were awfully costly. This ends the Mustangs' streak of three straight seasons starting at least 5-0.

Maryland: The Terrapins had far too many mistakes, and the penalties in particular will catch up to them if they're not careful. But Hemby has been impressive this season, and the Maryland offense averaged 7.2 yards per play.

SMU went 10 of 21 on third down, which is part of the reason the Mustangs were able to finish with 30 first downs. Rashee Rice had 11 catches for 193 yards.

"I know we moved the ball up and down the field, but we didn’t come away with enough points," Lashlee said. "They bent but didn’t break plenty. When you run 96 plays and they run 61, you feel like that’s going to be good for you. We’re not being careless, but three turnovers killed us again."

Tennis standout Frances Tiafoe was at the game and was introduced on the big screen during a break in the action. Tiafoe's father helped build the Junior Tennis Champions Center in College Park, and Tiafoe recently made the semifinals of the U.S. Open.

Maryland: The Terps play their Big Ten opener at No. 4 Michigan.