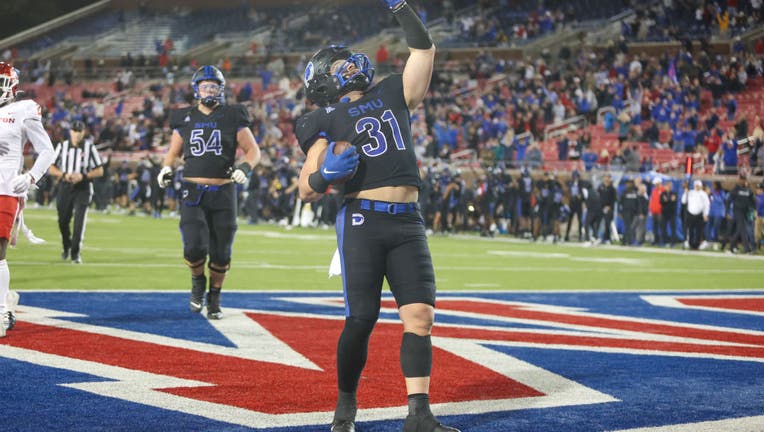 DALLAS (AP) - Tanner Mordecai set school and American Athletic Conference records with nine touchdown passes — an NCAA-record tying seven coming in the first half — and SMU's offense exploded for a 77-63 win over Houston on Saturday.

On the gridiron, their combined 140 points set the NCAA single-game scoring record for two teams in regulation. The previous record of 137 points was set when Pitt beat Syracuse 76-61 on November 26, 2016.

SMU reached school records with 77 points in a game (which tied the AAC record), 11-total touchdowns, nine passing scored and 433 total yards in the first half.

The Mustangs (5-4, 3-2 American Athletic Conference) scored touchdowns on their first nine drives of the game and didn't punt until their 10th drive with 5:30 left before the end of the third quarter. Mordecai also had a 2-yard touchdown run with 8:43 before halftime for a 35-21 lead and his 10 total TDs set new single-game program and conference records.

The Mustangs needed to keep their foot on the pedal because Houston quarterback Clayton Tune did his best to keep the Cougars (5-4, 3-2) in it, throwing for seven touchdowns and running for another.

Tune joined David Klingler, Jimmy Klinger and Andre Ware in Houston's seven-touchdowns-thrown-in-game club. David Klingler reached the mark on three occasions in the 1990 season and holds the all-time school record of 11 also in 1990.

Tune missed touchdown number eight when he threw an interception in the end zone down 77-63 with 1:43 left. SMU secured three picks on Tune.