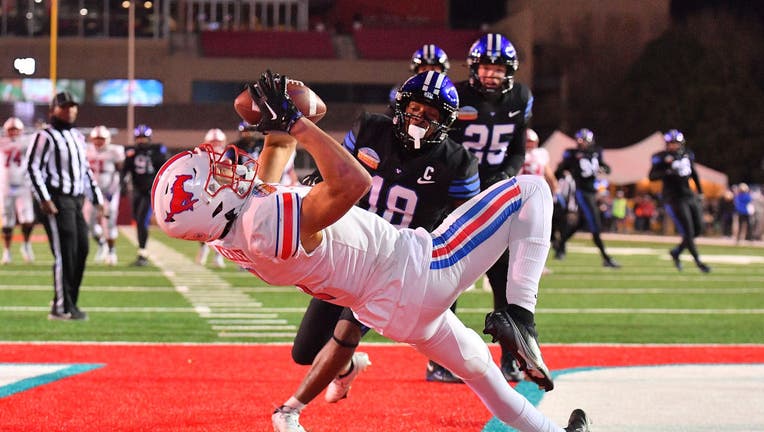 ALBUQUERQUE, NEW MEXICO - DECEMBER 17: Wide receiver Jordan Kerley #1 of the SMU Mustangs catches a touchdown pass against defensive back Kaleb Hayes #18 of the Brigham Young Cougars during the second half of the New Mexico Bowl at University Stadium

"I’d go for it again a heartbeat," SMU coach Rhett Lashlee said of the decision. "I trust these guys and I wanted to give them a chance to win."

Mordecai, who finished with 218 passing yards and two touchdowns, tried to cut up the middle on a designed run and was dropped by Robinson, shutting down SMU’s comeback attempt from a 24-10 third-quarter deficit.

The 2-point try came after Jordan Kerley went high in the air to snare a 12-yard TD pass from Mordecai.

Taking his first snaps in a college game, BYU redshirt freshman Sol-Jay Maiava-Peters ran for a game-leading 96 yards with a touchdown, and Christopher Brooks added 88 yards and a score for the Cougars (8-5). Maiava-Peters was 7 of 12 passing for 47 yards and an interception.

"I think we knew we could play with three quarterbacks," Cougars coach Kalani Sitake said. "I kind of hinted that we had three guys we were comfortable playing. And we would kind of were going with the hot hand."

And that ultimately proved to be Maiava-Peters.

After an apparent fumble recovery in the third quarter was overturned, the Cougars got a 76-yard interception return for a touchdown from linebacker Ben Bywater, breaking a 10-all tie.

"I knew they had three receivers out there and there was only two of us so 3-on-2," Bywater said. "I knew they liked their odds so I knew they were going to throw it. When that happened, I knew they weren’t going to hand off. I jumped it and when I looked the ball was right in my hands."

Bywater added a game-high 11 tackles as part of a surprisingly stout performance by a BYU defense that had been allowing 30 points per game.

"For us, we had a chip on our shoulder," he said. "We showed how resilient we are."

The Cougars defense also turned in a big play on fourth-and-2 at the BYU 24 with five minutes left in the game as Alden Tofa sacked Mordecai for a 17-yard loss.

SMU (7-5) raced to an early lead, getting a 35-yard field goal from Collin Rogers and 9-yard scoring pass from Mordecai to Roderick Daniels Jr., around a 1-yard scoring run by Maiava-Peters in the first quarter.

Jake Oldroyd booted a 31-yard field goal in the second quarter for BYU, and the team were tied at 10-all at halftime.

After Bywater scored on the interception, BYU added a 22-yard scoring run by Brooks in the third quarter.

SMU closed within seven points at 24-17 in the fourth quarter when Tyler Lavine scored on a 3-yard run. Lavine finished with 91 yards on 23 carries.

With three inexperienced quarterbacks on the BYU roster, surprise starter Maiava-Peters put in a strong bid for starter for the upcoming season.

"For me, my mentality is still the same," he said. "I’m in the back. I know I’m going to have to fight in the offseason for the job. There’s a lot of people coming in, I have to keep my head humble for sure."

SMU’s Mordecai has already declared his intention to enter the NFL draft, so the Mustangs’ big question during spring ball will be figuring out the quarterback situation, as well.

BYU vs. Sam Houston State on Sept. 2. The real intrigue for the Cougars will center on their yet-to-be-determined first Big 12 opponent after playing as an independent since the 2011 season.

"We’re excited to go to the Big 12," Sitake said. "It will be a lot of fun. We’ve known about it for awhile now but we’ve asked the kids not to talk about it. Now let’s go. Now we go to work. The emphasis going into the offseason is to work. These guys know and they’re ready to get uncomfortable and grow and get better in the offseason. We’re going to have a fun spring ball, get after it, but we have to be a more physical team."

SMU vs. Louisiana Tech on Sept. 2. The Mustangs look to build upon the successful debut season of coach Rhett Lashlee.