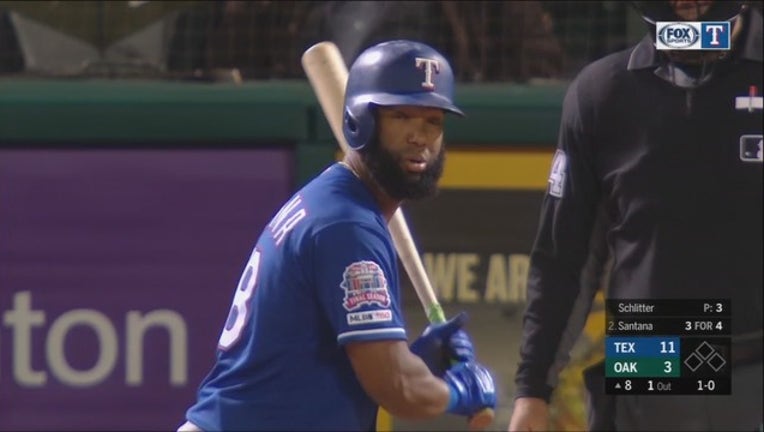 OAKLAND, Calif. (AP) - Having smacked his first grand slam to get within reach of hitting for the cycle, Danny Santana acknowledged swinging hard for a triple in the eighth inning.

A little too hard.

Santana struck out in his final at-bat, the only blemish on what he called the best night of his career. The outfielder drove in a career-high six runs as the slumping Texas Rangers routed the Oakland Athletics 11-3 on Thursday.

"I knew that I was missing it," Santana said through a translator. "I just wanted to hit the ball hard to see if I made it."

Texas won after placing outfielder Joey Gallo on the injured list following wrist surgery earlier in the day. The All-Star slugger will miss at least a month.

Santana propelled the Rangers to only their second win in 11 games. He singled in the first inning and had a two-run double as part of a five-run fifth against A's starter Brett Anderson.

With the bases loaded in the sixth, Santana homered off reliever Wei-Chung Wang. He struck out swinging against Brian Schlitter in the eighth.

"This has been the best game that I have had in my whole career," Santana said. "Before, I tried to pound the ball, get on base, steal bases. Now what I'm doing, what's making the difference, is I'm trying to hit the ball hard."

Ramón Laureano singled in two runs for Oakland. The A's have lost four of five and hold a half-game lead for the second AL wild card.

Ariel Jurado (6-6) overcame a shaky start and allowed three runs on three hits in seven innings for his first win since June 27. Jurado struck out six, walked two and retired 16 of the final 17 batters he faced.

"The first inning it looked like he was a little tentative, kind of feeling for his pitches," Rangers manager Chris Woodward said. "From the second inning on it looked like he said, 'I have to go after these guys.' And you see the results."

Anderson (9-6) gave up five runs in 4 2/3 innings. The left-hander was activated from the paternity list before the game.

"Under different circumstances I'd be a little more upset," Anderson said. "I can't be too upset because I just had a kid, who's healthy, and a wife who's healthy. Things change when you have a kid."

After drawing a one-out walk in the eighth and with the Rangers in a defensive shift, Oakland's Marcus Semien took second without drawing a throw and then kept jogging when he noticed Texas had no one covering third.

Texas second baseman Rougned Odor took away a hit from A's slugger Khris Davis in the seventh when he made a sliding stop on the outfield grass and fired a one-hop throw to first baseman Logan Forsythe.

Willie Calhoun was called up from Triple-A Nashville to replace Gallo on the roster. Texas also acquired pitcher Shane Carle from the Atlanta Braves for cash, then optioned the 27-year-old right-hander to Nashville. Carle was 4-2 with a 5.13 ERA in 20 games, including one start, at Triple-A Gwinnett in the Braves organization. He was designated for assignment Wednesday by Atlanta. Right-hander Kyle Dowdy was activated off the injured list by Texas and designated for assignment.

A's catcher Nick Hundley also was activated off the injured list and designated for assignment. Hundley had been out since June 8 with back spasms and underwent arthroscopic knee surgery on June 18. Right-hander Tanner Anderson was optioned to Triple-A Las Vegas.

Rangers: Gallo left Tuesday's game in Seattle because of soreness in his wrist. After undergoing X-rays and an MRI, he returned to Texas, where Dr. Thomas DiLiberti removed a fractured hook of the hamate bone in Gallo's wrist.

Athletics: OF Stephen Piscotty (sprained right knee) took batting practice and ran in the outfield before the game. Piscotty is expected to begin a rehab assignment in the next few days.