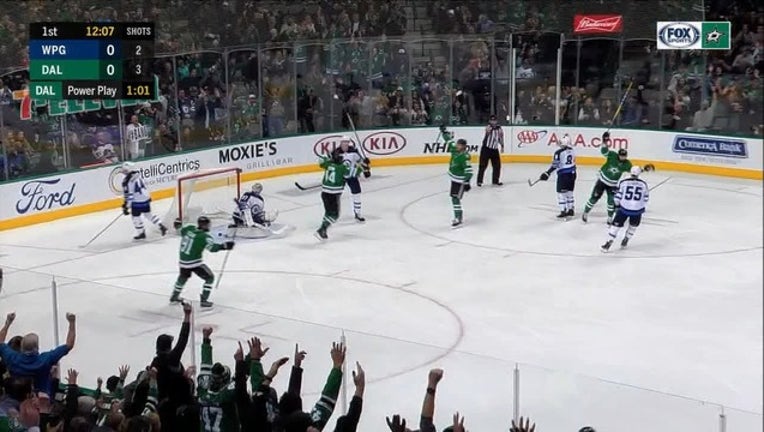 Comeau, Faksa and Brett Ritchie scored their first goals of the new year and the Stars defeated the Central Division-leading Winnipeg Jets 4-2.

"We really didn't do anything special out there," said Benn, the Stars' captain. "We just put it in the corners and tried to hit guys and work our butts off. When you do that, good things happen."

The goals by Ritchie, Comeau and Faksa gave the Stars a 3-0 lead after two periods. Tyler Seguin scored in the third period. Benn, who assisted on Comeau's goal, and Seguin lead the team with 18 goals each.

Ben Bishop made 15 of his 27 saves in the third period as Dallas snapped a four-game losing streak.

Branden Lemieux and Kyle Connor scored 21 seconds apart in the third period, rallying the Jets within 3-2. Connor Hellebuyck stopped 35 shots for the Jets, who had won four in a row and were 18-6 in their previous 24 games.

Dallas out-skated the Jets, playing their ninth game in 16 days.

"You're a little bit slow, they're real fast and it gets away from you. We found a way to fight back," he said.

Lemieux scored three goals in Winnipeg's last two games. Connor has three in the last three games overall, and three in three games against the Stars this season.

During their four-game skid, the Stars scored only three goals and were 0 for 11 on the power play.

The Stars scored their first power-play goal in five games when Ritchie tipped in John Klingberg's shot from the blue line at 6:54 of the first.

"I'm playing as the middle guy there," Ritchie said. "(Klingberg) said the last game he played them that he was able to get some shots through. I was ready for that."

Ritchie's third goal of the season was his first point since Dec. 7. He has played in only 10 of Dallas' 20 games since then and was a healthy scratch in the other 10.

Comeau gave the Stars a 2-0 lead 22 seconds into the second period. He took a rebound of a shot by Esa Lindell and wristed it past Hellebuyck from the left side of the net. Comeau's fifth goal was his first point since Dec. 29, after a nine-game goal drought.

Roman Polak came out of the penalty box, and 14 seconds after the Stars' fourth successful penalty kill, he assisted on Faksa's eighth goal, a wrist shot from the left faceoff circle at 13:36 of the second. Faksa had been without a goal in eight games, dating to Dec. 31.

Winnipeg's Lemieux skated in from the right corner and shot past Bishop into the left corner of the net at 3:25 of the third. After the faceoff, the puck went to Connor low in the right circle, and he sent it into the upper right corner.

"That next shift after you get scored against and you're up 3-1 at home, you have to get the momentum back," Dallas coach Jim Montgomery said. "We didn't do that. But besides that, the rest of the third period was a good period."

The Jets were unable to score on their five power plays.

"It's a tough power play to stop," Comeau said after playing 4:12 on the penalty-killing unit. "Our PK's been pretty solid all year. We've got guys that will work."

NOTES: Connor's goal gave him 100 career points. . The Jets' penalty killers had been 12 for 12 in the previous three games. . The Stars had been 0 for 11 on the power play during their four-game losing streak and went 2 for 7 Saturday. . Dallas C Tyler Pitlick (upper-body injury) sat out. . Rookie Lemieux had his third fight of the season, this one against Stars D Connor Carrick in the first period. . Three Texas Rangers - Delino DeShields Jr., Joey Gallo and Rougned Odor - dropped ceremonial first pucks before the game.

Jets: After the All-Star break, on Jan. 28, they'll be back on the road at Philadelphia.

Stars: Have an 11-day break before meeting Buffalo on Jan. 30 in the fifth of six straight home games.