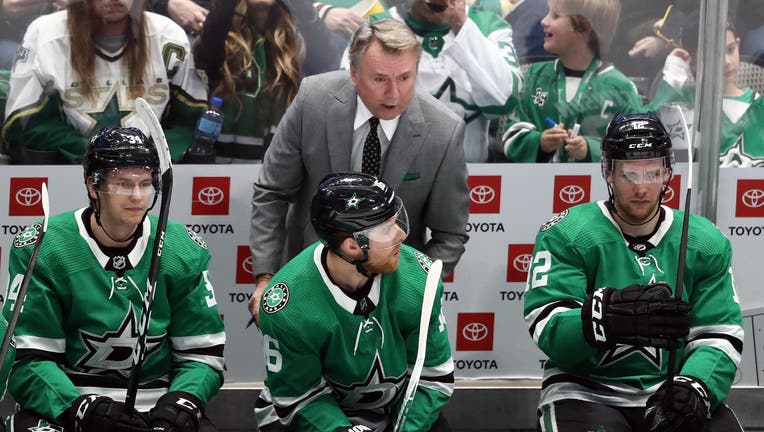 Coach Rick Bowness of the Dallas Stars talks with Joe Pavelski #16 during play against the New Jersey Devils in the third period at American Airlines Center on December 10, 2019 in Dallas, Texas. (Photo by Ronald Martinez/Getty Images)

Bowness has been serving as the team’s interim head coach since December when Coach Jim Montgomery was abruptly fired for unprofessional conduct.

"The Stars are very excited to officially announce Rick as the team's head coach," said General Manager Jim Nill. "After being called upon in a difficult situation, Rick stepped into the interim head coaching role seamlessly and used his unmatched experience to lead the team to a successful second half of the season and a spot in the Stanley Cup Final.”

Nill said Bowness was able to connect with the players and staff and make the team his own. By the end of the season, they were competing for him because they wanted to see him win.

"My wife Judy and I are thrilled to have this opportunity to continue our work here in Dallas," Bowness said. "This team is very special for me, that time in Edmonton was unlike any experience I have ever had in hockey, and it brought us together as a staff and as a team. We had a great run to the Stanley Cup Final, but we have some unfinished business left and we're looking forward to the opportunity to build on what we started."

The 65-year-old coach guided Dallas to a 20-13-5 record and their first Stanley Cup Final appearance since 2000.