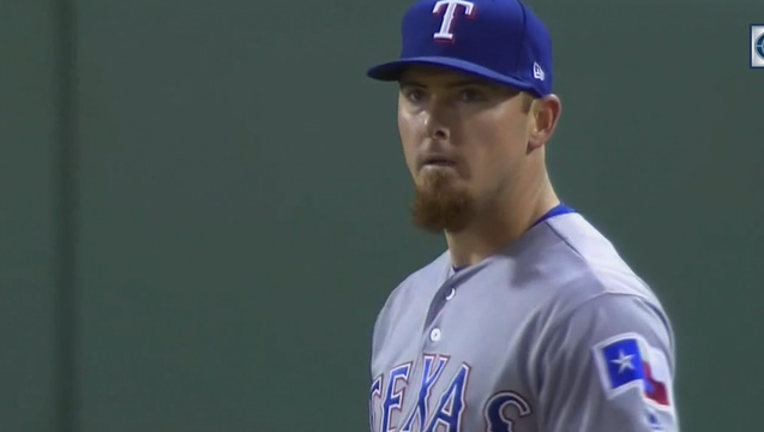 BOSTON (AP) - Chris Sale was perfectly happy to sit back and watch the Red Sox hitters do the work this time.

Sale cruised into the fifth inning, then was rewarded in the seventh when the Boston batters erupted for seven runs on their way to a 9-4 victory over the Texas Rangers on Wednesday night.

Sale (5-2) struck out six, falling short in his attempt to become the first pitcher in baseball's modern era to strike out at least 10 batters in nine straight games in one season.

But he didn't seem to mind.

"It was fun," said the left-hander, who received more runs of support in the seventh inning alone than while he was in any other game this season. "You get run after run, hit after hit. When we score like that, it's fun."

Dustin Pedroia waved home the tiebreaking run on a wild pitch, then singled in two more as the Red Sox turned a 3-1 deficit into a five-run lead and earned their third straight victory. Sam Travis had two singles for the Red Sox in his major league debut.

"I was a little nervous in the first inning," he said. "I'd be lying to you guys if I said I wasn't."

Mike Napoli homered for Texas, which has lost three of four to follow a 10-game winning streak.

Sale, who also struck out 10 or more batters in eight straight games in 2015 with the White Sox, remains tied for the season record with Pedro Martinez. (Martinez had 10 straight in a span from 1999-2000.)

After scoring four runs in support of Sale in his first six starts, the Red Sox have scored 27 while he was in the game in his last five. He took a no-hitter into the fifth, but finished with three earned runs, six hits and a walk in 7 1/3 innings.

"Guys pulled through for me when I was probably pretty mediocre," he said.

Asked if he felt any different, he said: "Everything's the same.

"If I get my (expletive) handed to me, it's not like anything's wrong," he said. "Any more amazing questions from you all?"

SEVEN IN THE SEVENTH

It was 3-1 until the seventh, when Andrew Benintendi and Travis singled with one out to chase Perez. Mitch Moreland singled to make it 3-2, pinch-hitter Josh Rutledge singled to tie it and, after Mookie Betts was intentionally walked to load the bases, Moreland scored on a wild pitch to give Boston the lead.

Pedroia singled in two more runs, Xander Bogaerts doubled and Hanley Ramirez was intentionally walked to load the bases. Dyson was pulled after walking Chris Young to force in another run.

Austin Bibens-Dirkx got Benintendi to pop up foul of first base, but Napoli let it fall safely - his second such error in the game. Benintendi followed with a sacrifice fly that made it 8-3 before Travis was called out on strikes to end the inning.

Rangers: 2B Rougned Odor was shaken up when he dived for Betts' grounder up the middle in the third inning. He was slow getting up. After being looked at by the trainer, he remained in the game.

Red Sox: LHP David Price made his second rehab start for Triple-A Pawtucket, allowing six runs - three earned - seven hits and a walk. He struck out four in 3 2/3 innings, throwing 89 pitches, 61 for strikes, and left without addressing reporters. 3B Pablo Sandoval also played in the game, going 2 for 4 with two runs.

"He felt fine physically," said Red Sox manager John Farrell, who added he would talk to Price on Thursday morning to determine how to proceed. "We had a scout there who liked what he saw."

Rangers: Will send RHP Nick Martinez (1-2) to the mound in the finale of the three-game series.