DALLAS - The Cotton Bowl will once again be packed with fans in burnt orange and crimson as Texas and OU renew their long-standing rivalry on Saturday.

The Sooners come into this year’s Red River Showdown ranked sixth in the country. The Longhorns are No. 21.

Ahead of the game, the Texas Longhorns show choir will be performing for a free concert Friday at Galleria Dallas. Fans can wear their burnt orange and join the choir for a pep rally ahead at noon.

Sooner fans are invited to see the Pride of Oklahoma perform Friday at the Renaissance Dallas Addison Hotel from 3 p.m. to 8 p.m. The Sooners Spirit Squad and Ruf/Neks will be there, and so will the Sooner Schooner along with Boomer and Sooner. 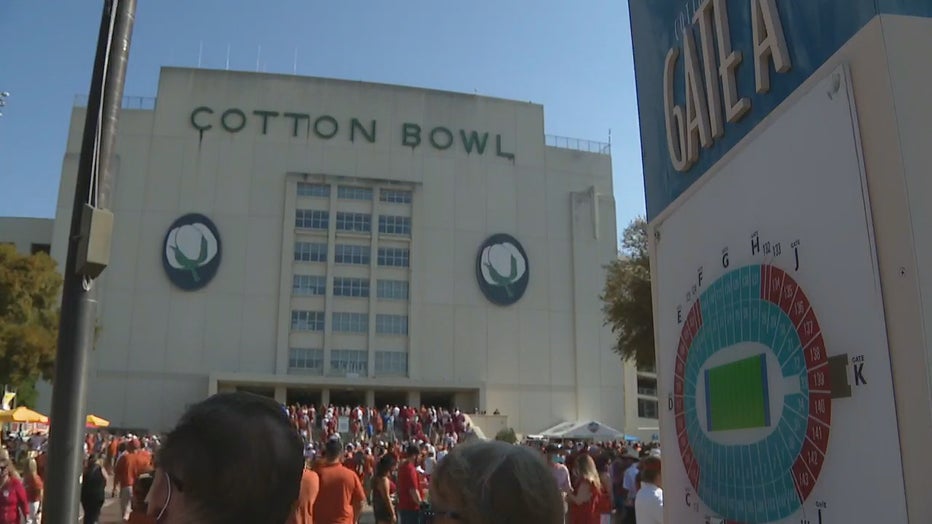 The Longhorns’ biggest supporter is calling on Texas fans to bring their best effort.

"Can you drown out their fans? Can you be that much louder? Can you believe more than they do? Can you have more horns than they do down? Yes, you can. And remember, appreciate them putting the horns down. You know why? It’s a compliment to us. It means they hate us more than they love themselves. Sorry for them but hooray for us," said actor Matthew McConaughey.
McConaughey, UT’s "Minister of Culture," will be ready to give the Longhorn fans a boost at the Cotton Bowl during Saturday’s game.

Attendance for last year’s game was capped at 25%. This year there will be a full house.

The State Fair of Texas is encouraging fans to arrive early and be aware of COVID-19 safety protocols.