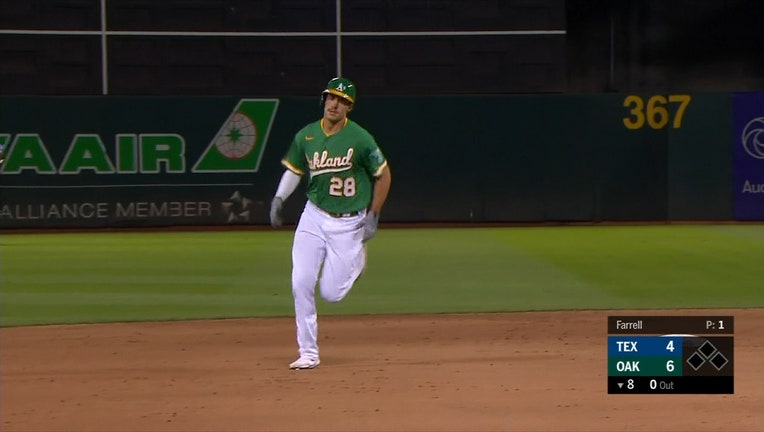 Austin Allen hit his first career homer, a go-ahead, two-run drive in the seventh inning, as the A’s stunned the Rangers late for a second consecutive night and won their fifth straight. On Tuesday, Stephen Piscotty hit a walk-off grand slam in Oakland’s 5-1 win.

Shin-Soo Choo homered on the game’s first pitch for the second time in six days for the Rangers. Todd Frazier had a pair of singles and Nick Solak added an RBI double. Joey Gallo struck out four times.

Olson hit a two-run homer off Rangers starter Kyle Gibson in the first, then added a solo shot off Luke Farrell in the eighth.

Allen, who played sparingly for the Padres last year, had the big hit with his two-run homer off Ian Gibaut (0-1) in the seventh. That put the A’s ahead 5-4 and snapped a 1-for-13 funk for Oakland’s young catcher.

It’s also nothing new for Choo. He has 36th career leadoff home runs, including nine on the game’s first pitch. Choo’s four leadoff homers at the Oakland Coliseum are the most by an opposing hitter.

Gibson had nine strikeouts in six innings for the Rangers. He gave up four hits and three runs while pitching on seven days of rest.

Manaea allowed four runs and six hits. The left-hander also walked a batter for the first time in his three starts.

Texas traded RHP Ariel Jurado to the Mets for cash and a player to be named. Jurado, who had been in the Rangers organization for eight years, was designated for assignment last week. Additionally, LHP Joely Rodríguez was activated from the IL. To make room, the Rangers placed 1B Greg Bird on the 10-day IL with a right calf strain.

With Tuesday’s game ending on Piscotty's slam and Wednesday’s beginning with Choo’s first-pitch homer, it marked the third time since 1988 that back-to-back pitches in a single series have been hit for a walk-off home run and a leadoff homer, according to STATS.

Rangers shortstop Elvis Andrus hit the 300th double of his career, making him the fifth player in franchise history to reach the milestone. Andrus is also the only player in Rangers history to have at least 300 doubles and 300 stolen bases, according to Baseball Reference.

Rangers: 2B Rougned Odor (right oblique tightness) is not healing as quickly as hoped and manager Chris Woodward has not ruled out placing him on the IL. Odor was scheduled to do light hitting in the cage before the game and the team plans to make a decision one way or the other soon. … RHP Rafael Montero (right elbow tendinitis) could rejoin the Rangers when they return to Texas for Friday’s series against the Angels.

Athletics: LHP A.J. Puk (strained shoulder) has progressed in his throwing program out to 75 feet. The prized prospect received both cortisone and platelet-rich plasma injections.

Rangers LHP Mike Minor (0-2, 5.91 ERA) starts Thursday and needs five strikeouts to reach 1,000 for his career. Minor went winless in three starts against Oakland in 2019. The A’s counter with RHP Mike Fiers (0-0, 5.40), who had no-decisions in each of his first two starts.