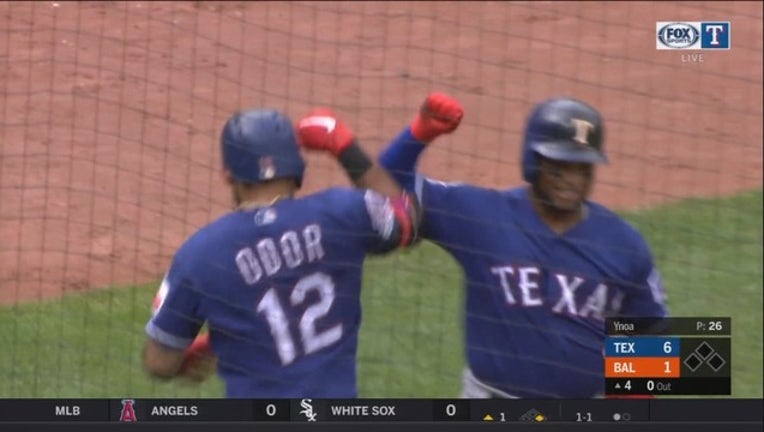 BALTIMORE (AP) - The Texas Rangers appear to have their offense operating at full efficiency again, just in time for a closing three-week stretch against some of the best teams in the American League.

Rookie Nick Solak had three hits and four RBIs, Ronald Guzmán and Rougned Odor homered and the Rangers beat the Orioles 10-4 Sunday to complete their first four-game sweep at Baltimore in 37 years.

After scoring once in each of the final two games of a series at Yankee Stadium, Texas scored 29 runs against Baltimore - including 26 in the last three games.

"At the end of the day there is a guy with a ball and we got a bat. It doesn't matter who we face," said Delino DeShields, who contributed a pair of hits and an RBI.

After dispatching the lowly Orioles, the Rangers next host Tampa Bay and Oakland before playing two games in Houston. Texas then ends the season with three games against Oakland, the defending champion Red Sox and Yankees.

"We got a lot of kids up here, first time in the big leagues," DeShields noted. "This is really going to tell them where they are at, competition wise."

DeShields is referring to guys like Solak, who reached highs in hits and RBIs in his 19th big league game.

"It was phenomenal," manager Chris Woodward said of Solak's performance. "He's had games where he hit the ball harder but today he takes what they give him."

Solak has six RBIs against Baltimore and five against everyone else.

Mike Minor (13-8) allowed two runs over eight innings and struck out three to raise his season total to 183. The left-hander has eclipsed his previous career marks for wins (12) and strikeouts (181), set with Atlanta in 2013.

Texas had 20 hits off Asher Wojciechowski (2-8) and six relievers. Texas scored in each of the first four innings while building a 6-1 lead and pulled away with a three-run sixth that made it 9-2.

"That's probably the best we've been in a long time," manager Chris Woodward said. "When we got pitches to hit we obviously hit them pretty hard."

It all added up to the Rangers' first four-game sweep of the Orioles since July 2001 and their first in Baltimore since July 1972, when the Orioles played in Memorial Stadium.

Solak started the onslaught with an RBI single in the first inning and two-run single in the second. Guzmán added a solo shot in the third and Odor hit his team-leading 24th home run leading off the fourth.

It was the 25th time this season that Baltimore allowed at least 10 runs. Texas outscored Baltimore 29-15 in the series.

Baltimore has lost five straight for the fifth time this season and is just three defeats short of losing 100 for the second year in a row.

Renato Núñez hit his 29th home run for Baltimore, and Hanser Alberto had three hits to raise his batting average to .321, including .420 against lefties.

"We're really impressed with both those guys this year and hope they finish the season strong," Hyde said.

Woodward fully expects his club to match the opposition's intensity down the stretch.

"We're trying to win every game. What a great experience for our guys to finish the season on," Woodward said. "I want our guys to fight to the end."

"That tells you we're winning series against good teams," Woodward said. "That would be more important to me than the actual .500 mark."

Rangers: Texas hasn't abandoned hope of getting back Hunter Pence, who's been on the IL since Aug. 24 with a lower back strain. "If he has a chance to play one game, he's going to play one game," Woodward said. "I think he'll be back."

Rangers: The Rangers call upon 14-game winner Lance Lynn (14-10) in the opener of a three-game set against visiting Tampa Bay on Tuesday. Lynn is 0-4 in his last six starts.

Orioles: Also off Monday, Baltimore resumes its penultimate homestand by sending Ty Blach (1-2, 10.95 ERA) to the mound to launch a three-game series against the Los Angeles Dodgers.