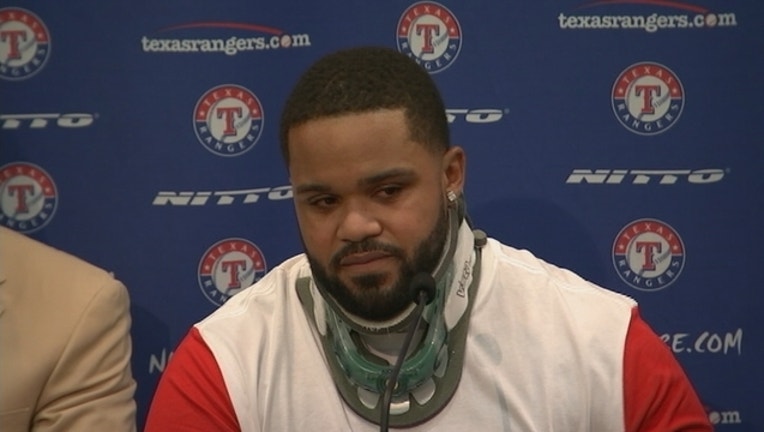 ARLINGTON, Texas (AP) — Prince Fielder wiped away tears, pointed to his two sons sitting next to him and talked about being in big league clubhouses since he was their age.

Still wearing a neck brace 12 days after a second cervical fusion, the burly 32-year-old Fielder wept Wednesday as he said health issues were forcing him to end his 12-season career.

"To not be able to play, it's going to be tough," said Fielder, once one of the most durable players in the majors.

His sons — one who turns 12 next week and the other 10 — sat with him at the podium, mostly with their heads down and also shedding tears. They have been regulars at the ballpark with their dad, much like he often was with his father, Cecil, a slugger who played 13 seasons for five teams.

"The kids actually love baseball more than Prince. It was a sad moment," teammate Elvis Andrus said. "You rarely see him like that."

All of Fielder's teammates, along with Rangers coaches and staff, filled the interview room to support him.

When the Rangers acquired him in November 2013 for second baseman Ian Kinsler, the first baseman had played at least 157 games every year since 2006, and appeared in 809 of 810 possible games the five seasons But Fielder was limited to 289 games in Texas because of two neck surgeries in just more than two years.

"Even though I know I struggled personally this year, this was actually the most fun I've ever had and the best I've ever felt mentally about baseball," Fielder said. "That's the only thing that really hurts about not being able to play is that my brain was really good, with my body, just, you know, it just gave out."

Fielder will finish his career with 319 career homers, the same number that his father had playing one more season but 141 fewer games. The only other father-son duo with more than 300 homers each is Bobby and Barry Bonds.

After being limited to 42 games in his Rangers debut in 2014, Fielder talked about how much he missed baseball and returned last season with a revived passion for the game.

Primarily a designated hitter in 2015, Fielder hit .305 with 23 homers and 98 RBIs in 158 games, though midway through the season again started feeling symptoms related to neck issues. He then struggled throughout this year, hitting a career-low .212 with eight homers and 44 RBIs in 89 games until finally getting an exam three weeks ago while the team was in Los Angeles.

Scott Boras, Fielder's agent, said they figured it was just a precautionary exam and that maybe he would spend some time on the disabled list, "but nothing like this."

An MRI showed a herniation between Fielder's C4 and C5 disks, just above where he first had surgery in May 2014. Doctors were already recommending that he quit playing before the second surgery July 29.

"To just suddenly have the lights turned out like that ... we're pretty steadied and pretty prepared, but to get that phone call, I was really taken back," Boras said.

Fielder was only two years into a $214 million, nine-year contract when he got to Texas. That guaranteed deal goes through 2020, for $24 million each season.

While no longer playing, Fielder didn't formally retire, meaning the Rangers would have him on the 60-day disabled list during the regular season but would have to add him to their 40-man roster each offseason until the end of the contract.

The Tigers owe Texas $6 million a year as part of their 2013 deal. The Rangers are responsible for the remaining $18 million, though about half of their liability could be covered by disability insurance.

"When the game is taken away from you like that, I don't think that it's easy to handle," 37-year-old Texas third baseman Adrian Beltre said. "It's easier when you yourself say, 'You know what, I had enough. I'm going to go home and be with my family.' But when you go home because you can't do it anymore, that's different."

Fielder said that when he gets the brace off — "This is killing me, this is terrible," he said — he will be back with the AL West leaders.

"They've got work to do, I've got some cheerleading to do," Fielder said. "And hopefully win the World Series and pop the champagne."