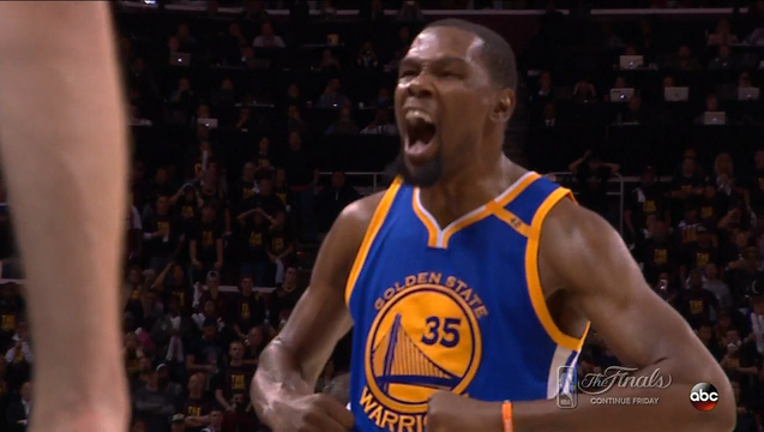 CLEVELAND (AP) - Kevin Durant released his deep shot, the one he always makes in his dreams.

As the ball hung in the air, his plan to win a championship, Golden State's grip on the series, Cleveland's last-gasp attempt to defend its title, all of it was on the line.

Durant drained the shot of his professional life - a 3-pointer over LeBron James with 45.3 seconds left - and scored 31 points as the Warriors, pushed harder than they have been throughout their pristine postseason, moved within one win of a title and payback by rallying to beat the Cleveland Cavaliers 118-113 on Wednesday night to take a 3-0 lead in the NBA Finals.

The Warriors trailed by six with three minutes left before Durant, criticized for leaving Oklahoma City last summer to chase a championship, brought them back, scoring 14 in the fourth.

"He took over," Warriors coach Steve Kerr said. "You can tell, he knows this is his moment. He's been an amazing player in this league for a long time, and he senses this is his time, his moment, his team."

With their 15th straight win, the Warriors now have the longest postseason streak for any team in the four major professional sports.

But that means little to Golden State's players, who with a victory in Game 4 on Friday night can exorcise those haunting demons from last June when the Warriors blew a 3-1 lead in the Finals to the Cavaliers.

No team has ever overcome a 3-0 deficit, and it doesn't appear any team is equipped to hang with these Warriors, who may go down as one of the best ever.

Klay Thompson added 30 points and Stephen Curry had 26 for this California Dream Team now one win from its second title in three years.

If not for their meltdown last year, the Warriors, whose record-setting 73-win season got lost in the Finals aftermath, would be looking for a third straight crown.

"We talked about it since the Finals last year that the last season was a very unique year, for a lot of different reasons, and we learned a lot," Curry said. "I think we have grown and matured just mentally of how to just pace yourself through this long year and take every day as a new experience and something that you can kind of take control of."

Curry hit a layup and after both James and Irving missed for the Cavs, Durant dropped his 3 - a shot that could be the one most remembered in this magnificent run by the Warriors.

"All I was looking at was the bottom of the net," Durant said. "I saw he (James) was playing his heels behind the 3-point line. I've been working on that shot my whole life. To see that go in, that was liberating, man. We've got one more to go."

After Golden State went up, Irving missed a 3 from his favorite spot on the right side and the Warriors closed it out with four free throws in the final 12.9 seconds before celebrating briefly on the floor and then charging down the hallway to their locker room.

After winning Games 1 and 2 by a combined 41 points at home, the Warriors had to scrap for all 48 minutes to take down the Cavs, who will need a similar effort to avoid being swept by a team with few - if any - weaknesses.

"It's the most firepower I've played in my career," said James, who played all but two minutes. "I've played against some great teams, but I don't think no team has had this type of firepower."

James and Irving were relentless in the second half and it appeared they had done enough to get Cleveland over the top and perhaps back in the series.

Durant, though, was not going to be denied. Not after getting this close, not after enduring so much heat for turning his back on the Thunder, not with a chance to put the Cavaliers in an insurmountable hole.

The 7-footer finished 10 of 18 from the field with eight rebounds and four assists. Curry, who has benefited more than any other player by Durant's arrival and is healthy in these NBA Finals, added 13 rebounds and six assists.

With Kerr back on the bench for the second straight game after battling back pain, Golden State, which made a record 9 3-pointers in the first quarter and finished 16 of 33 behind the arc, also got just what it needed from its reserves as Andre Iguodala had several big plays, none bigger than stripping James of the ball on a potential tying 3-pointer with 12.6 seconds left.

Cleveland had collapsed in the third quarter of the first two games, letting the Warriors run away and hide. Irving didn't let that happen, scoring 16 in the third, and the Cavaliers held the Warriors to 22 points in their lowest scoring output in any quarter in this postseason.

The Cavs, though, couldn't get far enough ahead to get comfortable and the Warriors kept chipping away before Durant's defining 3 - the shot that makes dreams come true.

Warriors: Golden State is the 13th team to take a 3-0 lead in Finals, and third since 1996. ... Broke the record of 14 straight postseason wins previously held by the NHL's Pittsburgh Penguins, who did it in 1992-93. ... Curry has hit at least one 3-pointer in all 73 career postseason games. ... Golden State's nine 3-pointers in the first quarter broke the previous Finals mark held by five teams, most recently the Warriors in 2015.

This story has been corrected to show that the Pittsburgh Penguins had 14 straight postseason wins in only one season, not two.