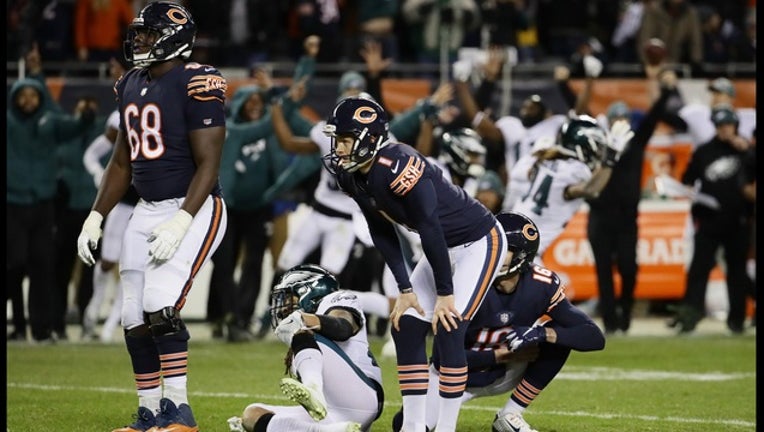 Cody Parkey of the Bears reacts after missing a field goal attempt in the final moments of their loss to the Eagles in the NFC Wild Card Playoff game at Soldier Field on January 06, 2019 in Chicago, Illinois. (Photo by Jonathan Daniel/Getty Images)

CHICAGO (AP) - Cody Parkey sat by his locker with a glazed look, struggling to explain how he did it again.

The Chicago Bears' embattled kicker somehow managed to nail yet another upright and hit the crossbar while missing a 43-yard field goal in the closing seconds of a 16-15 wild-card loss to the defending Super Bowl champion Philadelphia Eagles on Sunday.

"You can't make this up," Parkey said.

It was a cruel and appropriate end to a season in which he managed to hit uprights while missing field goals and extra points six times. This one came at the worst possible moment.

Nick Foles gave Philadelphia a 16-15 lead on a 2-yard touchdown pass to Golden Tate. Wendell Smallwood got stopped on a 2-point conversion run, Tarik Cohen returned the kickoff 35 yards to the 42, and the Bears (12-5) appeared to be in business.

They had third-and-2 at the 25 when Mitchell Trubisky missed Anthony Miller on a deep pass down the middle. With 10 seconds remaining, the Bears turned to Parkey, hoping their kicker could extend their breakthrough season.

After making three field goals earlier in the game, he sent one right between the uprights with a few feet to spare. But the Eagles called time to ice him so it didn't count.

Parkey then thought he booted a "great ball" on the next attempt. Several Eagles, however, said defensive tackle Treyvon Hester touched it.

The kick hit halfway up the upright and ricocheted off the crossbar, bringing the Bears' breakthrough season to an end.

At times this season, it seemed Parkey had as much success hitting uprights as he did converting kicks.

He hit four while missing two field goals and two extra points in a win over Detroit at Soldier Field. He also hit one while missing an extra point in the regular-season finale at Minnesota.

"I'm going to do everything I can to take the human side of it," coach Matt Nagy said. "I think the easiest way you look at it is that you put yourself in his situation. You think he tried to miss it? No, I know that. But you've got to learn from it. You've got to figure out the why part, and he'll do that, and we need to do that, too."

Parkey's penchant for hitting uprights was one of the biggest mysteries this season. And his status becomes one of their biggest offseason question marks. If the Bears don't release him, they could bring in someone to compete with him.

After signing a four-year contract, Parkey was 26 of 34 on field goals, counting the playoffs. On extra points, he was 42 for 45.

"It was tough," star linebacker Khalil Mack said. "But you've got to learn from this. I was praying, praying real hard, but things happen for a reason. I told him to keep his head up. That's a tough pill to swallow for a guy in that position. But that's still a teammate, that's your brother."

"I just told him, 'Dude, you had like half our points," Long said. "I can't even imagine what he's going through. It's a tough job. It's a really tough job. I just wanted to make sure that he understood we all had his back. And I think every single guy in here did the same thing I did. ... We lost as a team."