The South Oak Cliff Golden Bears brought home the championship trophy to a huge celebration in the streets Tuesday morning.

It’s the first time a Dallas ISD school has won a state championship in football since the late 1950s.

A victory parade to honor the team’s accomplishment featured the players, the school’s band, dance teams, sports cars and police and fire units.

The spirited procession started near Ledbetter Drive and Marsalis Avenue and ended with a rally at the high school’s football field and at SOC Renaissance Park.

Longtime community members were out in full force to show their support.

"It’s important for the community to be able to celebrate because it’s going to bring a lot of positive energy to the community," said Ferelle Woodhouse, a team supporter. "And I think to the kids that are out here seeing South Oak Cliff get to the state championship, that's definitely going to inspire and encourage a lot of kids to come on back to the DISD."

"Most often, everybody says it means everything or means the world. But to me, it means pride and unity and hope," said Silvia Salinas, Dallas ISD’s athletic director. "We have a lot of folks and a lot of kids looking up to these players and these coaches. I think it clears up the doubt that a lot of folks had about Dallas ISD in athletics particularly, that, just believing that we could do it, and we did it and proved them wrong." 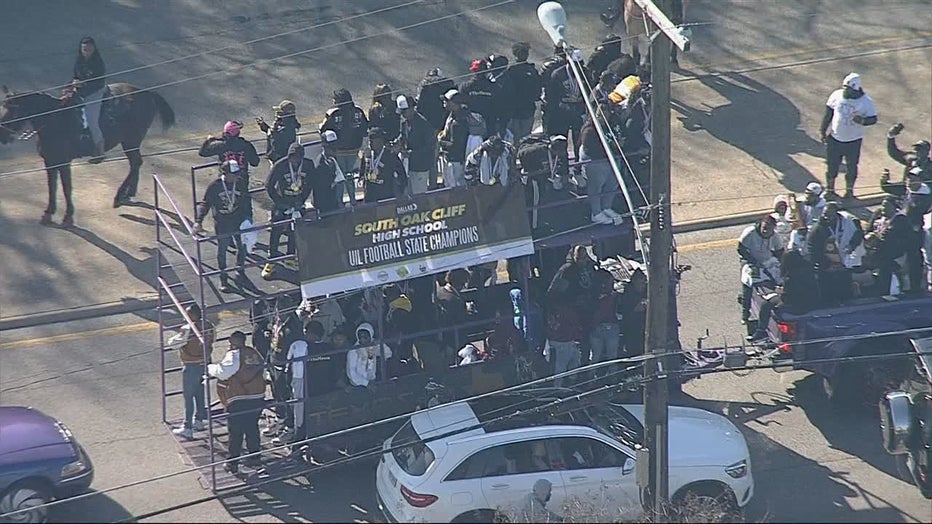 90-year-old Doris Walker has lived in the community for 55 years and wanted to join in on the fun.

"I walked down here because I wanted to support them, let them know how proud I am of them," she said.

Coach Cheston Jones brought three of his young players out to take in the celebration.

"It all starts here," he said. "Once you show them the opportunity of seeing something bigger as far as high school football, coming from middle school and little league football, you know the dedication and determination these guys have."

Salinas said her fellow athletic directors in Austin and Houston have been congratulating the team.

"The urban ISDs rally together, and they just said, 'This is everything to us.’ It means they can do it too," she said. "And it brings a lot of hope and pride to our communities and to our kids and coaches."

They all agree that it’s more than just about football.

"You need to be proud of everywhere you’re from, especially if you’re from South Oak Cliff," said DISD Superintendent Dr. Michael Hinojosa.

"You give us the opportunity and the resources. We’ll show you that Black and Brown kids can achieve," said Dallas ISD Trustee Maxie Johnson.

Even while soaking in the celebration, many already setting their sights on next year.

Reunion Tower was also golden Tuesday morning to celebrate the team’s win. And the Dallas Cowboys are planning to recognize the players at Sunday’s game against Washington.