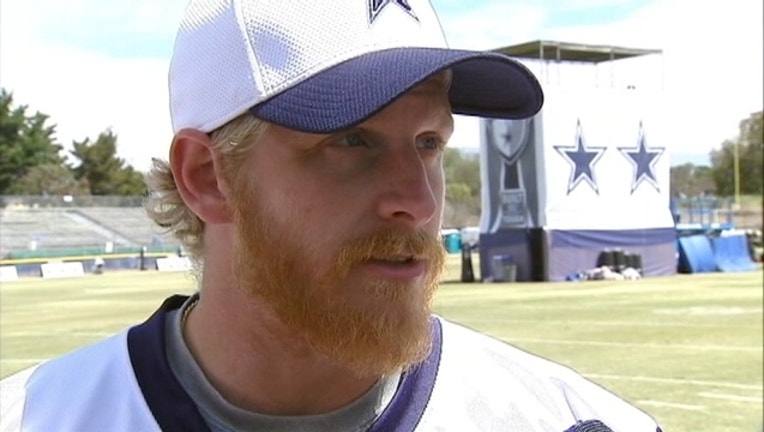 OXNARD, Calif. (AP) — Cole Beasley has the security of a long-term contract and a growing bond with Tony Romo in the Dallas passing game.

Whether the diminutive receiver can get rid of the "paper boy" tag put on him by coach Jason Garrett is another question, even with a bushy beard atop his 5-foot-8 frame.

"He still looks like the paper boy," Garrett says with a chuckle. "You got to admit that."

For the record, Beasley didn't quit shaving to get his coach to quit calling him that. Doesn't bother him. The fourth-year player figures he will always be proving he's big enough to play in the NFL. Frankly, he doesn't know any other way to play.

Beasley showed up in several big moments during the Cowboys' playoff run last year and had career highs in yards receiving (420) and touchdowns (four).

His reward as a restricted free agent was a four-year, $13.6 million contract with $5 million guaranteed. Another $2.4 million will be guaranteed just a few days into the new league year in 2016.

Not that he needed money for motivation, but Beasley has been one of the standouts of camp, drawing loud cheers from fans with shifty moves that leave him wide open in passing drills. He's probably fourth on Romo's list behind Dez Bryant, Terrance Williams and tight end Jason Witten but is developing into a dynamic threat from the slot.

"That's the funny part," Romo said. "When Cole was here when he was young he was a mismatch. It just takes time for people to learn everything. He's a tough matchup. He took that mental step. Once he did it was game on to him."

The first thing Beasley had to do was decide he wanted to play in the NFL. He walked away from camp when he was a rookie out of SMU in 2012, saying he was quitting. But Garrett and the staff gave him time and space and he came back within a couple of days.

"I think about that every so often," Garrett said. "It's a great reminder to us as coaches to understand what these guys are going through. Sometimes I reflect back just in my mind to my experiences as a rookie and how big everything seemed."

Beasley doesn't reflect on it at all, and rejects any attempt to revisit it.

"It's irrelevant. It happened a long time ago," Beasley said. "There's a thing we live by in the football world is you have one play, if it's bad or good, you move on to the next one. That's kind of how I live it."

With the new contract, the Cowboys are trying to get their money's worth. Beasley has been prominent as a return man on special teams during camp.

He has a chance to be the primary punt returner after Dwayne Harris signed with the New York Giants in free agency. Kickoff returns are a possibility, with special teams duties depending on how many snaps Beasley gets on offense.

"I absolutely love him. Period," special teams coach Rich Bisaccia said. "There's no way to measure Beasley by what you see. Can't get inside him. Because if we did, that heart would encompass his entire body. He knows how to get hit, how not to get hit, knows how to finish."

All "paper boy" kidding aside, Garrett sees the same things.

As strong as he has looked in camp, Beasley isn't counting on a new batch of career highs. He believes it depends on a running game that is trying to replace NFL rushing champion DeMarco Murray. And it depends on his approach.

"I still feel I have a lot to prove," said Beasley, who has 916 yards and six touchdowns for his career but is still looking for his first postseason score. "I still have doubters every day. I'm going to be out here working like I just got here."

NOTES: RB Joseph Randle was limited in practice Tuesday with a muscle strain in his side. ... The Cowboys signed CB Brandon Smith and waived DT Chris Whaley, who tore an Achilles tendon in practice Monday.