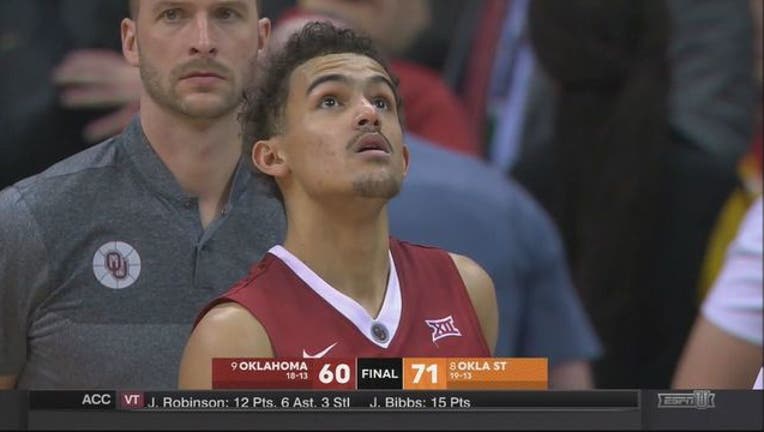 KANSAS CITY, Mo. (AP) - Cameron McGriff scored 18 points, Jeffrey Carroll added 13 points and 13 rebounds, and Oklahoma State pulled away from Oklahoma after squandering most of a 16-point lead for a 71-60 victory in the opening round of the Big 12 Tournament on Wednesday night.

Kendall Smith had 11 points for the eighth-seeded Cowboys (19-13), who led 58-53 with 6 minutes left before easing away down the stretch to set up a quarterfinal matchup with No. 1 seed Kansas.

Oklahoma State swept the ninth-ranked Jayhawks during the regular season.

Trae Young had 22 points on 7-for-21 shooting to lead the Sooners (18-13), who must now anxiously await their NCAA Tournament fate following their eighth loss in their last 10 games.

The Sooners beat the Cowboys by 20 in early January, back when they were ascending to No. 4 in the nation. But things began to fall apart midway through the conference schedule, beginning with a lopsided loss to Kansas State and an overtime defeat to the Cowboys in Stillwater.

The slump hit its nadir with a six-game skid that put the Sooners on the NCAA Tournament bubble.

Things weren't a whole lot better during the first half at the Sprint Center. Young was hassled every time he touched the ball, nobody else made shots and the Cowboys slowly built a 39-28 lead.

It swelled to 50-34 when McGriff hit his third 3-pointer of the second half.

Young finally got on track for the Sooners, burying back-to-back 3-pointers when the Cowboys' defense lapsed. That kicked off a 12-2 run that concluded with Brady Manek's 3-pointer and drew coach Lon Kruger's slumping bunch within 52-46 midway through the second half.

It remained nip-and-tuck until the 6-minute mark, when the Sooners proceeded to miss six straight and nine of 10 from the floor. Brandon Averette began getting loose near the basket for layups, Carroll added a jumper and Tavarius Shine's basket made it 64-53 and forced Kruger to call timeout.

Oklahoma has struggled all season to put a supporting cast around Young, one of the leading names for national player of the year. Rashard Odomes had 12 points, but starter Kameron McGusty was held to six on 2-for-9 shooting and forward Khadeem Lattin had two points and four boards.

Oklahoma State helped its NCAA Tournament resume by beating the Sooners for the fourth time in five meetings, but a win over the Jayhawks on Thursday would almost certainly lock up an at-large bid.

Oklahoma heads back to Norman to await its postseason fate.

Oklahoma State gets ready to face Kansas on Thursday afternoon.