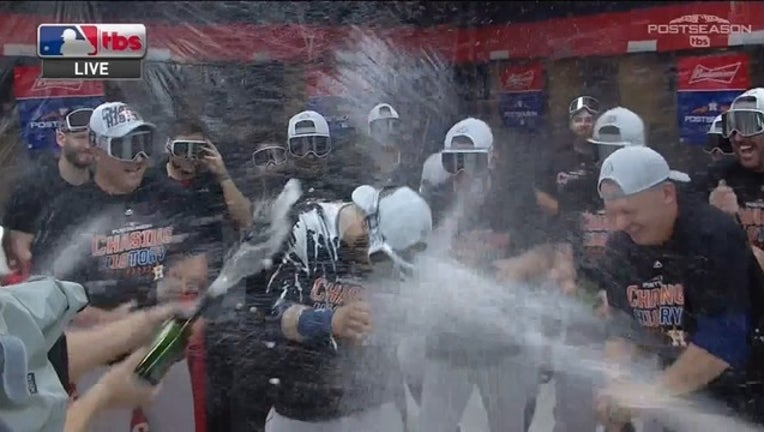 CLEVELAND (AP) - As his teammates sprayed each other with champagne and beer in Houston's buzzing clubhouse, ace Justin Verlander stayed clear of the fray and foam while enjoying a cigar.

This wasn't the time to get soaked. Bigger parties lie ahead.

The Astros are back in an October orbit.

The defending World Series champions advanced to the AL Championship Series for the second straight year - with surprising ease - by completing a division-round sweep of Cleveland on Monday with an 11-3 lashing in Game 3 helped by two key throwing errors from Indians reliever Trevor Bauer.

"No one takes anything for granted here," Verlander said. "That's the DNA of the guys in this clubhouse. This team has a propensity to do big things in big spots. This is an atmosphere that breeds winning.

"We have the most complete team in baseball."

Marwin Gonzalez hit a two-run double off Bauer in a three-run seventh inning , and the Astros scored 10 runs in their final three at-bats to turn a series that was supposed to be competitive into a complete rout.

"We're the reigning world champs, and we really have a good ability to show up for the day," Houston manager A.J. Hinch said. "So proud of our guys, the work they put into the winter. It was a short winter for us. As you can see, our guys are pretty hungry to advance."

The Astros moved to the ALCS on-deck circle, where they await the Boston-New York winner for a shot to play for another championship.

George Springer homered twice, Carlos Correa hit three-run homer for his first hit of the postseason and Houston's bullpen combined for four scoreless innings, including six straight outs by winner Collin McHugh , as the AL West champions served notice that a second Series title is on their itinerary.

After the Astros finished this demolition of the Indians, they briefly celebrated on the infield at Progressive Field before donning ski goggles in their clubhouse.

For the Indians, another postseason ended earlier than planned. Cleveland was beaten in the first round for the second year in a row - New York came back from a 2-0 deficit in 2017 - and baseball's longest World Series championship drought will reach a 71st anniversary.

The Indians hit just .144 in the series, were outscored 21-6 and have lost six straight playoff games. They were swept for the first time since the 1954 World Series.

"We got to go home now, before we're ready to," manager Terry Francona said. "That hurts. It always stings. I just told the guys, we've got a number of guys that are free agents. You know there's going to be some turnover, and it's a real special group to all of us.

"So that's a hard one, when you're saying goodbye before you're ready to."

Reliever Andrew Miller, one of several potential free agents, couldn't allow himself to think about the future while saying goodbye to teammates.

"There's probably a million things you could point to why we didn't win three games," said Miller, who was on the disabled list three times this year. "This is isn't the way we want it to end."

Francisco Lindor homered off a circular digital clock in the fifth off Dallas Keuchel to give Cleveland a 2-1 lead that vanished in the seventh.

With a major assist, actually two of them by Bauer, the Astros rallied off Bauer. The starter-turned-postseason reliever, who took the loss, stooped behind the mound and dropped his head after his two errant throws.

Tony Kemp singled and was awarded second when Bauer's pickoff throw hopped into the photographer's pit . Springer reached on a dribbler that catcher Yan Gomes couldn't make a play on as Kemp took third. Jose Altuve grounded into a forceout, with Kemp scoring to tie it 2-2 .

Bauer got the dangerous Alex Bregman to hit a comebacker. But the right-hander's throw to second was off line , pulling Lindor off the bag and and both runners were safe - a mistake that surely will haunt the enigmatic pitcher all winter.

"I caught the ball. I turned around to throw it," Bauer said. "I saw Frankie going to my right and the umpire crossing over and going to my left. I was in the middle of throwing. I kind of flinched. I made a bad throw. There's no way around it. That should have been the end of the inning.

As he walked to the dugout, Bauer, who did not commit an error in 28 appearances this season, received a polite ovation from Cleveland fans. They appreciated that the Indians had to ride him in October because of all the other problems in the team's bullpen.

Springer, who struck out on three pitches in his first two at-bats against Clevinger, got him the third time and drove the first pitch into the left-field bleachers to tie it 1-all .

It was Springer's franchise-record ninth homer in the postseason - he hit No. 10 in the eighth - and gave the Astros a homer in 12 straight playoff games, matching the AL record set by Baltimore (1983, 1997). After hitting just three home runs in the final 1½ months of the regular season, Springer went deep three times against Cleveland.

Unlike the Indians, who coasted to a third straight title, Houston got pushed.

But once the Oakland Athletics applied pressure, the Astros took off and went 29-10 after Aug. 18.

"At no point this season was there any complacency with this team," Verlander said. "If I had been traded here after they won the World Series, instead of before it last year, I would have assumed this was a young and hungry team when I walked in the clubhouse."

Houston hit eight homers in the series, including two from Bregman and one apiece from Correa, Altuve and Martin Maldonado.

The Astros, who were seventh in the AL with 205 homers in the regular season, connected four times in Game 1.

The Indians have lost nine straight consecutive postseason games when facing elimination, dating to Game 7 of the 1997 World Series.

Springer has seven homers in his last seven postseason games, matching the Lou Gehrig, Reggie Jackson and Carlos Beltran for the best seven-game span in history.

Francona said center fielder Leonys Martin has made significant progress following his battle with a life-threatening illness. Martin contracted a virus shortly after he was acquired in July from Detroit.

"He's doing OK, physically," said Francona, who expects the 30-year-old to be ready for spring training. "He's healing so fast that I think it's surprising the doctors at how quickly his heart has come back."

Martin was hospitalized with stomach pain, but he fell into critical condition with a bacterial infection that entered his bloodstream and attacked organs.