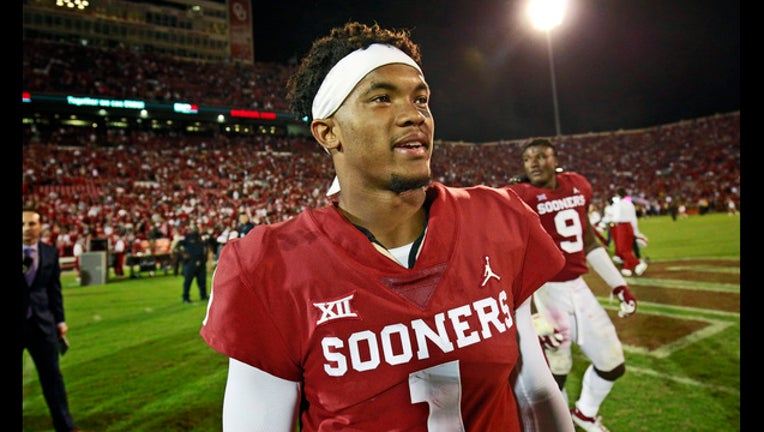 Quarterback Kyler Murray #1 of the Oklahoma Sooners walks off the field after the game against the Army Black Knights at Gaylord Family Oklahoma Memorial Stadium on September 22, 2018 in Norman, Oklahoma. (Photo by Brett Deering/Getty Images)

Oklahoma looks to regain its dominant form after being taken to overtime at home against Army last week, and Sooners QB Kyler Murray could use a big game to boost his Heisman campaign. Baylor was one of the conference's powers in the first half of this decade but has fallen hard since a sexual assault scandal led to coach Art Briles being fired in 2016. A win here would be Baylor's biggest post-Briles.

Baylor run defense vs. Oklahoma RB Trey Sermon. Baylor struggles against the run, and Sermon is capable of doing damage. The sophomore ran for a career-high 148 yards and two touchdowns on 12 carries against the Bears last season, all in the fourth quarter. He has 1,019 yards rushing in his career.

Baylor: WR Jalen Hurd is a big slot receiver at 6-foot-4 who played running back at Tennessee before transferring. He has 22 receptions for 311 yards and two touchdowns this season, and coach Matt Rhule says Hurd could get some short-yardage work at running back, too. Hurd had 24 carries for 109 yards and a touchdown for Tennessee against Oklahoma in 2015.

Oklahoma: WR Marquise "Hollywood" Brown was held without a catch last week after hauling in nine for 191 yards and a touchdown the week before against Iowa State. One of college football's best deep threats will be looking to get back on track.

Oklahoma won the first 20 games in the series. Baylor has won three of the past seven. ... Baylor QB Charlie Brewer is averaging 261.6 yards per game with a 67.6 completion percentage and 15 touchdowns in eight career starts. ... Baylor WR Denzel Mims has at least one catch 15 consecutive games. ... Oklahoma LB Kenneth Murray had 28 tackles last week, the most since the Football Bowl Subdivision began keeping track in 2000. ... Oklahoma won last week despite just 15:19 of possession.