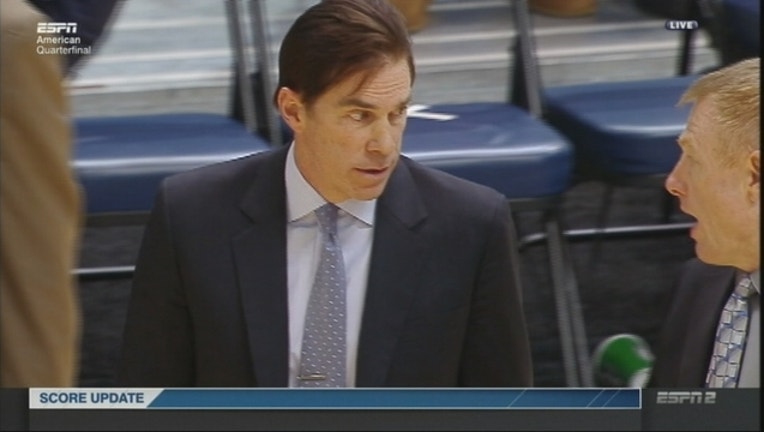 HARTFORD, Conn. (AP) - No. 12 SMU had been beating opponents by an average of 15 points a game this season and coach Tim Jankovich thought his team needed a test.

It got one Friday from ninth-seeded East Carolina in the quarterfinals of the American Athletic Conference Tournament.

The top-seeded Mustangs saw a 22-point halftime lead evaporate before rallying in the final minute to hold off ECU 81-77.

It was SMU's first postseason game in two years after being forced to sit out last season under NCAA sanctions.

"This is the best thing that could have happened," Jankovich said. "We needed this. This will help us. We needed some of the feeling that we had today. We needed to know that the next time this happens how we're going to sort it out better."

Semi Ojeleye scored a career-high 36 points to lead SMU. The conference's player of the year hit 12 of his 19 shots and pulled down 12 rebounds, giving him his fifth double-double this season.

Sterling Brown added 16 points for the Mustangs (28-4). The AAC's regular-season champions have won 14 straight and 24 of their last 25 games.

Kentrell Barkley, who has been battling tendinitis in his left knee, had 22 of his 24 points in the second half to lead East Carolina, which trailed by as many as 24 points in the first half. Caleb White had 17 points and Elijah Hughes added 15 for the Pirates (15-18).

SMU hit 12 of its first 17 shots and went into halftime with a seemingly comfortable 43-21 lead, paced by Ojeleye, who had 17 points and nine rebounds.

But the Pirates outscored SMU 56-38 in the second half.

"That game was just like, you've got to put it all out there, win or lose," Barkley said. "You got to give your all and just play hard, play basketball and don't go out without a lot of heart."

The Pirates trailed 63-45 with 7 minutes left before switching to a pressing defense and making their run.

A 3-pointer by White, followed by a steal and layup from Elijah Hughes on the inbounds, cut it to 71-69 with just over 3 minutes left.

SMU pushed the lead back to eight, but the Pirates rallied again and Hughes' 3-pointer tied the game at 77 with 57 seconds left.

Ojeleye then hit a layup on the other end and Barkley fumbled the ball out of bounds under the basket on ECU's next possession. The Mustangs held on.

"Everything's been kind of going well for us all year, but being in a tournament situation and realizing that if you lose you go home, it's different," Ojeleye said. "I think being battle-tested with this group is important for us and getting the win tonight is a great move forward."

East Carolina: The Pirates, who upset Temple 80-69, in the opening round, have not beaten a ranked team since 2002 and had been blown out twice by SMU this season. They lost by 31 points in Greenville on New Year's Eve and by 40 points in Dallas last month.

"We're a different team now," acting head coach Michael Perry said. "They've been knocked around and got back up again and they finally got to a point where they're tough and they're not going to run home. They're going to fight."

GIVING UP THE PERIMETER

In their four losses this year, they have allowed at least 12 3-point baskets. ECU had 13 on Friday. But SMU outscored the Pirates 42-24 in the paint.

SMU last played in the conference tournament in 2015. It won that event, which also was played in Hartford, but not before being tested by East Carolina. SMU beat the Pirates in that quarterfinal game, 74-68.

East Carolina's season is over.