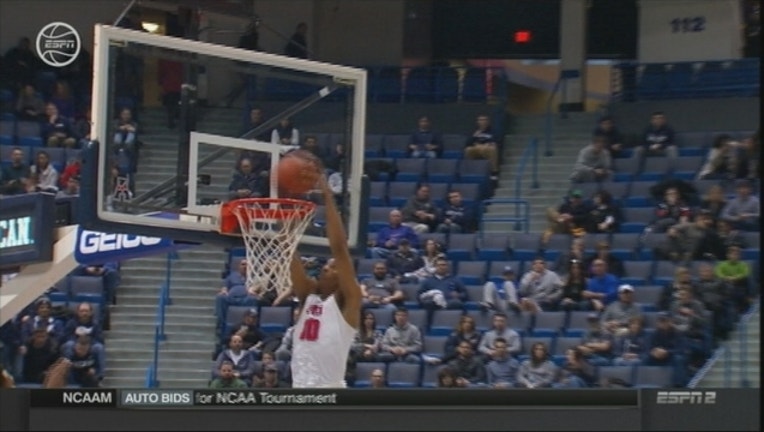 HARTFORD, Conn. (AP) - SMU goes into Sunday's American Athletic Conference championship on a 15-game winning streak, having won more games than any other team in the program's history.

Not bad for a squad that didn't get a single vote in the preseason AP Poll.

Semi Ojeleye added 17 points, and Shake Milton had 14 of his 16 points in the second for SMU, which is back in the championship game after missing last year's tournament because of NCAA sanctions. The Mustangs won the title in 2015.

"It's a good accomplishment, but we know we're not done," said Brown. "We've got a bigger goal that we're trying to accomplish and add to those wins."

Neither team led by more than six before Milton stole the ball from the 7-foot-6 Tacko Fall under the UCF basket and made the Knights pay on the other end with a 3-pointer for a 42-34 lead. Taylor was trying to signal for a timeout that led to a technical foul and Sterling Brown extended the lead to 10 with two free throws.

"I didn't see what happened, but it's basketball," said UCF coach Johnny Dawkins. "The player has to call (timeout). Everyone now is making plays on the basketball while the player is trying to make the call. So when that happens, there's going to be a lot of guys, a lot of congestion in that area."

That was part of a 14-3 run that gave the Mustangs a 50-36 lead and control of the game with just over 9 minutes to play.

Taylor tried to shoot UCF back into the game. He hit consecutive 3-pointers that cut the lead to eight points with 3 minutes left, but that was as close as the Knights would get.

Ojeleye had 10 of the Mustangs' 26 points first-half points and SMU went into halftime leading by just three. Taylor had eight for UCF and hit the first 3-pointer of the second half to tie the game at 26.

Both teams hit 10 3-point shots, but neither could score inside, each getting just 10 points in the paint.

"Both teams were locked in defensively, said SMU forward Ben Moore. "Come around tournament time, that's the most important thing. So both teams were playing hard on the defensive end and we were trying to keep them out of the paint. So that was a big key."

SMU finished with 15 assists on its 21 baskets, five of them from Milton.

UCF: The Knights had their best season since winning 22 games in 2011-12 as a member of Conference USA, their only 22-win season in the last 10 years. Friday's win over Memphis was just their second win the four-year history of the conference tournament.

SMU: The Mustangs are hoping to receive the program's highest seed in NCAA Tournament history. SMU was seeded fifth in 1985 tournament and received a sixth seed in 2015 after winning the AAC tournament in Hartford.

SMU's starters, as they have in most games this season, each played at least 28 minutes. Coach Tim Jankovich said fatigue is a concern as the Mustangs prepare for their third game in three days.

"I felt like this could be as hard as anything we'll do all year," he said. "Obviously, in the NCAA Tournament, you'll play some outstanding team, but at least they give you a day to rest if you're fortunate enough to advance."

Sterling Brown played in his 134th game for SMU, tying him for the most games played in program history. Ben Moore is tied for fourth on that list with 133 games played.

UCF is expected to receive a bid to the NIT