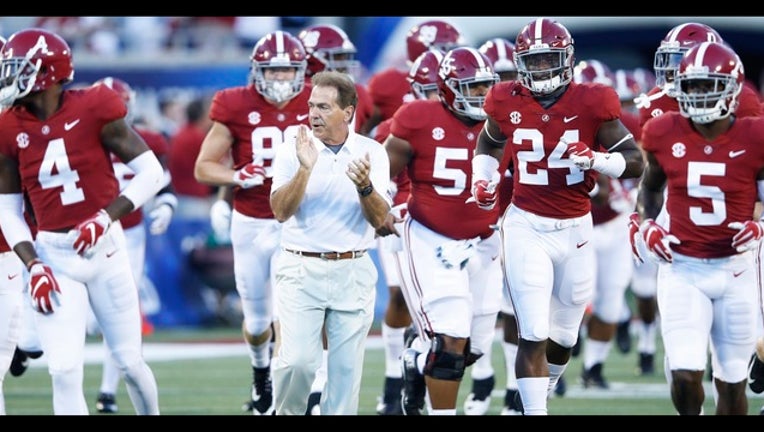 Head coach Nick Saban of the Alabama Crimson Tide brings his team onto the field prior to the game against the Louisville Cardinals at Camping World Stadium on September 1, 2018 in Orlando, Florida. (Photo by Joe Robbins/Getty Images)

Alabama wants to avoid an early stumble, having outscored its first three opponents by a combined 170-28. The Aggies nearly pulled off an upset of No. 3 Clemson and hope to make a statement in coach Jimbo Fisher's first SEC game.

Texas A&M's running game against Alabama's defense. Led by Trayveon Williams, the Aggies rank second in the SEC in rushing yards per game while Alabama is giving up 101 yards on the ground.

Texas A&M: QB Kellen Mond might need his second straight huge performance against a playoff contender for the Aggies to win. He passed for a career-high 430 yards and three touchdowns in the Clemson game.

Alabama: QB Tua Tagovailoa is the SEC's most efficient passer with eight touchdowns and no interceptions. He has yet to play even close to a full game thanks to the lopsided scores and sharing time with former starter Jalen Hurts.

Fisher was an assistant under Tide coach Nick Saban from 2000-2004 at LSU. Saban is 12-0 against his former staffers and beat Fisher's Florida State team 24-7 in last season's opener. ... Texas A&M's Williams has a league-leading 399 yards with four touchdowns. The Tide hasn't given up a rushing touchdown this season. ... Alabama has won the last five meetings. ... Texas A&M's offense has opened the season with three straight games producing 500-plus yards for the first time since 2009.