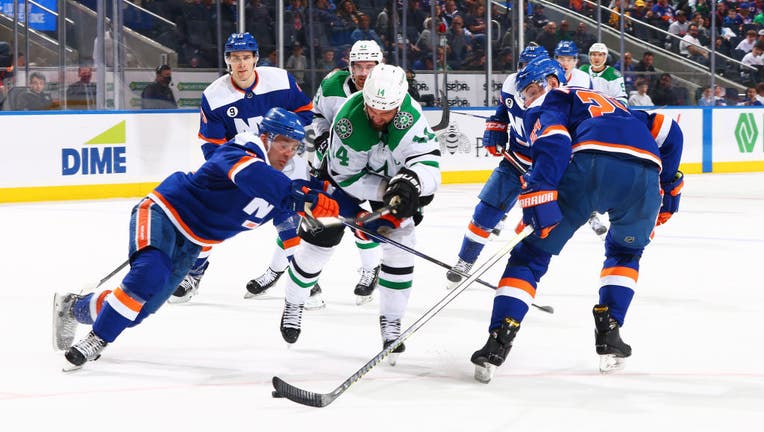 Ryan Pulock also scored for New York, which extended its point streak to six games and won for the fifth time in six games.

Denis Gurianov and Jacob Peterson each had a goal and an assist, but the Stars lost for the fourth time in five games. Jake Oettinger made 21 saves in his 33rd appearance this season.

Nelson scored twice within a span of 1:38 to give the Islanders a two-goal advantage in the early portion of the third period.

He broke a 1-1 tie with a power-play goal at 4:17 of the third. Oettinger was able to get his shoulder on the initial shot, but the puck had enough velocity to trickle across the goal line. Noah Dobson and Mathew Barzal assisted.

The Islanders stretched their lead to 3-1 when Anthony Beauvillier slid a puck through the crease to set up Nelson for a one-timer at 5:55. Anders Lee picked up the secondary assist and pushed his individual point streak to seven games.

Nelson completed the hat trick with an empty-net goal at 19:40 and set a career high with 27 goals this season.

Peterson trimmed the Stars' deficit to 3-2 with his 10th of the season at 11:39 of the third period. Islanders defenseman Scott Mayfield failed to control possession below the goal line and the puck squirted to Peterson in the slot. Tyler Seguin and Gurianov assisted.

Dallas had a chance to tie it at 3 in the final minutes of the third, but Varlamov denied Peterson's opportunity from the slot to preserve the Islanders' one-goal advantage.

Varlamov capped a strong 12-save first period with an impressive left pad save in the closing seconds on Michael Raffl's backhand attempt.

Pulock opened the scoring with a blast from along the boards at 3:16 of the second period. Cal Clutterbuck's aggressive forecheck led to the Islanders keeping possession in the offensive zone before Pulock's slap shot sailed between the legs of Oettinger.

Gurianov evened the score at 1 with a one-time blast from the slot at 18:46 of the second period. Mayfield tried to jump a long outlet pass, but Peterson was able to corral the puck and create an odd-man rush opportunity that Dallas capitalized on.

Before the equalizer, Josh Bailey had a scoring opportunity to extend the Islanders' edge to 2-0, but Oettinger's steady play between the pipes kept the Star's deficit at one goal.

The Islanders honored the late Jean Potvin before the game with a video tribute followed by a moment of silence.

The Islanders and Nickelodeon teamed up to create a multiplatform experience for the fans.

Nickelodeon-themed activation spaces were scattered throughout the concourses at UBS Arena for fans to enjoy, including: a Nick Jr. coloring station for kids with themed giveaways, a slime station where fans can assemble their own exclusive jar of slime, and a photo opportunity on Nickelodeon's famed Snick Big Orange Couch! Islanders event presentation and social staff also participated with cool graphics on the ice and on the team's social channels.