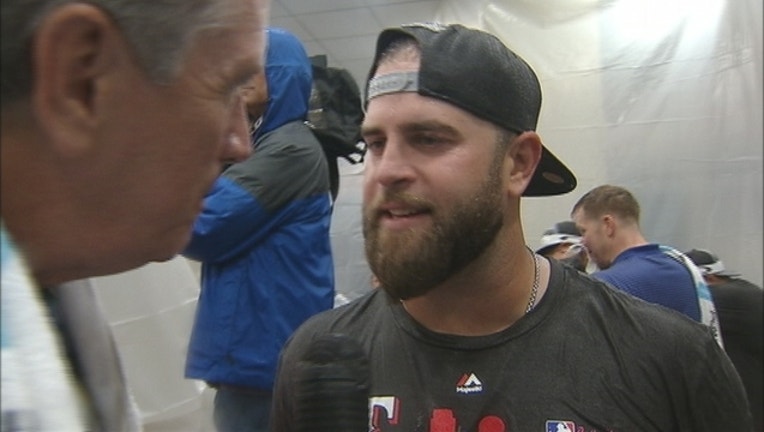 Expect them to only get louder and more frequent now that the Rangers are back in the playoffs again, two months after the return of Mike Napoli, who had 10 RBIs in their last World Series.

Even though first-year manager Jeff Banister wasn't in Texas for Napoli's first stint, he has said the right-handed power bat "might be the human victory cigar."

After a breakout season in 2011 as a catcher-first baseman with the Rangers, and being an All-Star the next season when they made it to the American League wild-card game, Napoli left in free agency and was part of the 2013 World Series championship in Boston.

With the Red Sox headed to another last-place finish, they traded him Aug. 7 to Texas — and Napoli immediately settled back into the clubhouse, almost like he had never gone, even with a lot of other changed players.

"In the two years I was here, it was pretty special too. It has that same kind of feeling," Napoli said. "It's just a group that has a lot of different personalities, but we all click in some kind of way."

The Rangers, who started August eight games back of the division lead, cinched the AL West title on the final day of the regular season. They open their first division series since 2011 on Thursday in Toronto.

Napoli is one of only three players in the postseason for the seventh time the past nine seasons, joining St. Louis outfielder Matt Holliday and Toronto catcher Russell Martin this fall. Yankees pitcher CC Sabathia would have been there as well before this week revealing that he is checking into an alcohol rehab center and will miss the postseason.

Those American flag shorts the Rangers wear often during batting practice and workouts, with the team logo and motto #NeverEverQuit on them, were courtesy of Napoli. He was initially in the clubhouse wearing similar shorts from the Red Sox and wanted to adapt them for his teammates in Texas.

"He was a player that as a team we really liked him and loved him when he was here," shortstop Elvis Andrus said. "As soon as he got back, I don't think it took him too long to adapt to the team again."

Josh Hamilton, part of the Rangers' 2010 and 2011 World Series teams who like Napoli left in free agency after 2012, was traded back from the Los Angeles Angels in late April. The 2010 AL MVP was back in the Texas lineup a month later.

"It's just nice to have those guys back, because the chemistry in this clubhouse is unbelievable," third baseman Adrian Beltre said.

"It's fun to kind of be a part of, and watch as moves were made this year, guys come up filling spots or whatever," Hamilton said. "That chemistry kept getting better and better, and that's difficult to do."

The week before reacquiring Napoli, the Rangers made deals to get ace left-hander Cole Hamels and reliever Jake Diekman from Philadelphia and right-handed reliever Sam Dyson from Miami.

Napoli hit only .207 in 98 games with the Red Sox. In Texas, playing primarily against left-handers, and even playing left field for the first time in his 10 major league seasons, he has hit .296 with five homers and 10 RBIs over 35 games.

"They were starting to play good ball before I got here. Just try to keep it going," Napoli said. "Everybody wants to say I'm a veteran and I've been there before, but this group kind of had it, that fight in them."